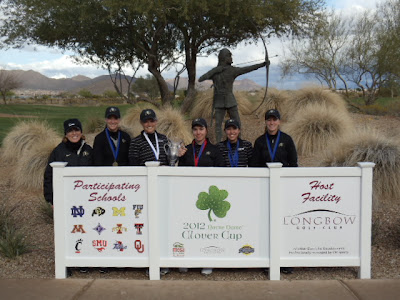 (MESA, Ariz.) - University of Colorado women's golf team blistered the field by 31 strokes (largest margin of victory in school history) to win the 2012 Clover Cup, a three-day collegiate women’s golf competition at Longbow Golf Club March 16 through 18. The Buffs finished 1-2-3 on the leader board and shot a team score of 9-under-par 855.  Senior Jess Wallace edged out sophomore Alex Stewart and senior Emily Talley for medalist honors.

Perhaps the Rocky Mountain type weather appealed to the Buffs, as play was halted on three occasions due to heavy rain including a pelting of hail that prompted one of the stoppages.

“Despite some rough spring weather on Sunday, we were able to close out a successful 2012 Clover Cup,” said Jay Larscheid, General Manger of Longbow Golf Club.  “Although CU ran away with it, the competitors continued to grind it out on a golf course that was set up to challenge every part of their game.  We look forward to building on the momentum from this event and turning it into one of the premier events in the country.”

Longbow Golf Club is a nationally recognized daily fee golf course located in Mesa, Arizona within Longbow Business Park.  Often described as the “Essence of Arizona Golf,” Longbow Golf Club serves up a desert golf experience that is firmly tied to the traditions of the game.