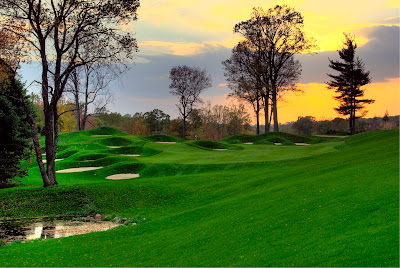 Pound Ridge Golf Club is in elite company alongside PGA Tour venues and world famous resorts including Bethpage State Park and Saratoga National. In 2011, Pound Ridge was ranked No. 8.

"We are honored to be recognized by one of golf's most prestigious publications and excited to climb the list again in 2012," says Ken Wang, owner of Pound Ridge. "The playing surface and surrounding landscape has matured, and the course is coming into its own in terms of pliability. Pound Ridge has truly emerged as one of the true modern marvels of Dye's legendary portfolio, and the Golfweek ranking is incredibly rewarding."

Pound Ridge Golf Club is a quintessential Dye course, exhibiting all the qualities for which he's so renowned: dramatic, beautiful, rhythmic, challenging, deceptive and subtle. The front nine opens with a decidedly playable 451-yard par 4 with a green complex set against a rock-lined water feature. Starting with the par-4 second hole - an uphill brute with the narrowest landing area on the course - Pound Ridge quickly morphs into a strategic blend of challenging driving holes and intriguing risk/reward approach shots.

In addition to being under an hour from New York City, the course is within minutes from population centers such as White Plains, Stamford and Greenwich, Connecticut. Flexible rates are designed for today's busy golfer, including $115 after 3 p.m., $105 after 5 p.m. and a nine-hole rates ranging from $60 to $80. Regular weekday and weekend rates (morning, early afternoon) range from $160 to $235.