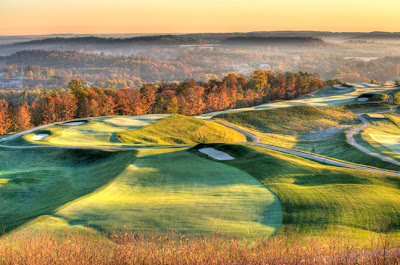 (French Lick, IN) - The award winning Pete Dye course at French Lick Resort in Southern Indiana once again has been selected the No. 1 course in the state of Indiana in Golfweek's 2012 "Best You Can Play, State-by-State" rankings. In addition, the resorts historic Donald Ross course is also ranked No. 2 on the state list again.

This latest accolade, ranking both resort courses as the top two in the state, appeared in the March 19 issue of the leading national publication. Golfweek's course evaluators submit ballots grading courses all over the country on a 10-point scale to determine the country's finest golf courses. Raters take into account factors such as routing of the course, feature shaping, greens, variety and memorable holes, conditioning, maintenance, and landscape management.

"We are very honored to be recognized by Golfweek Magazine and having both of our courses ranked No.1 and No. 2 in the state of Indiana," said Dave Harner, French Lick Resort's director of golf. "These rankings and the combination of the Dye and Ross courses continue to solidify French Lick Resort as one of the elite golf resort destinations in the country."

The Pete Dye course is regarded as one of the most breathtaking and exciting 18 holes of golf in the country. The course was carefully carved on a dramatic hilltop offering a variety of elevation changes, rugged and dramatic terrain, narrow fairways and challenging bunkers. There are spectacular views from every hole, some that stretch for over 40 miles.

Complimenting the award winning Pete Dye course, is the recently restored Donald Ross course, a parkland gem meandering up and down the rolling hills a few miles from the main resort. The wonderful routing of the holes take full advantage of the many elevation points for the classic Ross greens which slope dramatically from back to front. It is one of only two public Ross courses in the state of Indiana and played host to the 1924 PGA Championship won by Walter Hagen.

The resort has been on the national radar in recent years hosting such events as the 2010 the PGA of America's Professional National Championship and the United States Hickory Open Championship. In 2012, the Big Ten will host the Men's and Women's Championships and in 2013 the LPGA Legends will visit French Lick.

French Lick is the only resort in the world that combines the classic history of Donald Ross and the modern day design of the legendary Pete Dye. Golfers can now experience these two top-rated courses through a variety of spring golf package offerings including the "Early Bird Tune Up Package" starting at just $369, or "The Ultimate Spring Golf Escape" for $609.