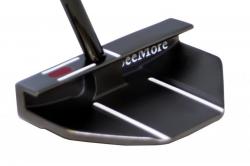 The new Big FGP and PCB putters feature cast 303 stainless steel heads with precision milled faces and SeeMore's patented RifleScope Technology (RST) alignment system, for a true reference point for perfect alignment and set up on every putt. They will be available in stores beginning in mid March, in a dark nickel-plated finish, and in some cases in a limited special black finish. The standard length models sell for $150. Belly versions sell for $165.

"The Big FGP offers an amazing new look in the SeeMore lineup, for those players wanting the solid feel of a large stainless steel mallet with perfect balance and a bold design, with strong alignment lines," stated Jim Grundberg, SeeMore's CEO. "The Big FGP is our most dramatic new product introduction in years. And the PCB pure center blade offers a classic center shaft blade, which is face balanced in the traditional sense as well as on the impact plane, for unmatched feel and roll. Best of all, both of these putters offer incredible game improvement benefits in the standard and belly versions as well and should be considered by any players looking to take their putting to the next level."

"SeeMore has been working on the roll out of the SPi idea for several years now, and in fact had a soft launch of the program during 2011 with a global team of instructors, where we really ironed this out to be a program that first and foremost worked for the needs of the hundreds of teaching instructors who told us they had a real void when it came to putting instruction," stated Jim Grundberg, SeeMore's CEO. "It is based on the teachings of our key global teaching and tour instructors, and the input of many of the tour players they work with, who have used SeeMore putters and the SeeMore system for years to improve putting performance in practice and in play on all tours."

Becoming SPi Certified will help golf teachers formulate a complete teaching plan to help their existing students and recruit new students to become great putters using the SeeMore system that has won 2 Major Championships and set numerous putting records on the PGA Tour. It is a complete game plan, which will give any golf instructor a new level of confidence in the proper teaching and fitting involved in putting instruction. Becoming certified to teach the system initially consists of online training and personal coaching. For more interest, contact Ted@SeeMore.com

RST Technology
SeeMore's patented RST, known by a visible gun sight on the top line, allows the golfer to set up the putter perfectly each and every time in relation to the intended target line. This is accomplished by lining up the black bottom portion of the shaft between two white lines and covering a signature red dot on the
heel of the top line. The process is like locking radar onto a target. The two parallel white sight lines frame the shaft and serve as an indicator that the golfer is in perfect position to make a consistent and reliable stroke.
Posted by Blogger at 8:05 AM

Thanks for sharing this great article! I feel strongly about it and love learning more on this topic.pcb suppliers ,pcb assembly