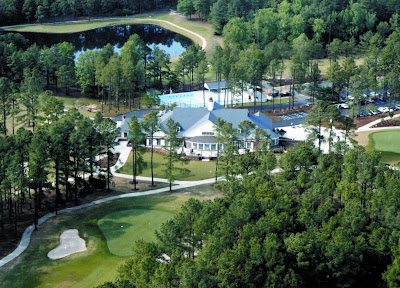 (FAYETTEVILLE, N.C.) — Solve this riddle: The centerpiece golf course inside Fayetteville’s first gated golf community opened in 1967. In 1974, a new owner came in (J.P. Riddle) and had a manned gate installed. Today there are two entrances to the property. Why then is it called Gates Four?

We couldn’t figure it out either so we posed the question to the son of Gates Four Golf & Country Club’s original developer, who also happens to be a riddle in name only – Joe Riddle.

According to the current owner, prior to the construction of the golf course, the property operated as a swim and boating club.

“At one time, the former farmland was owned by a man who built the 40-acre lake and called it ‘Lakewood,’” says Joe Riddle. “It had miniature golf, a lifeguard stand, boats, a restaurant, showers, covered patio, a juke box, even an island in the middle of the lake with a zoo on it.”

In 1966 a group of investors bought the land and did away with the previous venture. They brought in architect Willard Byrd to route a championship golf course. The semi-private layout was called “Irongate” and it operated out of the original lake building from 1969 to 1974 up until Joe’s father J.P. took over and turned it into a private enterprise.

Here’s where the gates start to multiply.

“There was an old iron gate on the property, and my dad and his associate didn’t want to take all of the name (Irongate) away, but they needed a new name for residential marketing purposes,” says Riddle. “There never was thought that there would be four gates to the project, but there were plans for four different types of living inside. So they named it Gates Four. ‘Gates’ comes from Irongate and the ‘Four’ signified the residential components – single-family executive homes, patio houses, condos, and a lodge or apartment rentals for golfers to visit and stay overnight.”

“We really should be called ‘Gates Three,’” says Riddle with a laugh.

So there you have it.

And Fayetteville visitors can have it too, now that the formally private Gates Four is now back to its original semi-private status.

Of course, the name isn’t the only attraction to Gates Four Golf & Country Club. There’s history, prestige and an atmosphere that can only be found at a course based on country club values. For those who don’t belong, they still can get that special treatment at the now semi-private facility and walk away feeling as privileged as those who live and play regularly behind the gates.

Since its grand reopening in May 2011, Gates Four has been entertaining members, guests and visitors with its Willard Byrd designed layout, its three-storied clubhouse and dining at JP’s Bar and Grill. For those looking at a stopover in Fayetteville or a multi-day stay, a round at this fresh offering would be a no-brainer.

General Manager Kevin Lavertu is no stranger to great golf, especially as it applies to the North Carolina Sandhills variety. A former Methodist College golfer and graduate of the school’s Golf Course Management Program in 2001, Lavertu’s first job after college was assistant pro at Gates Four for six months. He then went to Bayonet at Puppy Creek as the head professional, was general manager at Fayetteville’s Baywood Golf Club and then spent several years in Hilton Head, South Carolina working for ClubCorp.

He’s now back where his professional career began. Here is a list of things he feels makes Gates Four an outstanding golf option to those spinning their way through Fayetteville.

* A private club atmosphere allows golfers to enjoy a “country club for a day” experience at an extremely affordable price.

* A friendly staff is welcoming to both members and outside players.

* The overall quality and attention to detail makes Gates Four one of the top options in the area.

• The location is ideal, just seven miles off I-95 and centrally situated between Cypress Lakes and Bayonet at Puppy Creek. This is especially appealing for golfers looking to play 36 holes in a day and looking for good variety.

• With large setbacks, the golf course doesn’t feel like it is the centerpiece to a residential community.

• Championship length that can stretch over 6,900 yards.

The course winds its way across nice elevation changes in full view of the large community lake leftover from its “Lakewood” days. Where Gates Four is one of Byrd’s earlier works, Bayonet at Puppy Creek, located not far away, is one of his later ones.

“Gates Four is more classic and traditional, than say, Bayonet, which has a modern feel,” says Lavertu. “There are no real tricks, no blind shots, everything is right out in front of you. It has changed slopes, undulation and you find yourself never using the same club twice. It forces you to have precise iron shots and work the ball both left to right and right to left.”