(SANFORD, Fla.) - Feel Golf Co., Inc., an innovator in golf club design for the past three decades, is proudly celebrating its 27th Anniversary. 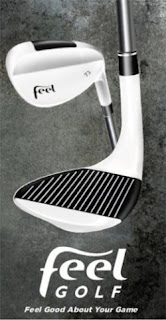 The company started designing custom wedges for Tour players in 1985 the same year Andy North won his second U.S. Open Championship. As a leader in precision club making, Feel Golf has continued to succeed amidst the economic downturn and a consolidation of equipment manufacturers through the inspiration and innovation of CEO and PGA Professional, Lee Miller PHD, known throughout the golf industry as "Dr. Feel."

Through its ground breaking designs like the 73° wedge, Feel Golf continues to be a top selling brand focusing on game improvement at an affordable price. The USGA conforming, satin-finished 73° wedge is designed to allow players to hit a very high, soft-landing shot with ease. It eliminates most of the short game "mechanical" guesswork of open stances, open faces and half swings. The 73° wedge enables the golfer to take their full swing, a golfer's most repeatable swing, and simply aim it right at the pin. For 2012, the ever popular 73° wedge is available in Feel Golf's "SG" all white finish and PVD.

Feel Golf has always been a company that thinks outside the box following rules for renegades. In keeping with that trend, the company launched its new Square Groove "SG"™ line of irons and wedges at the 2012 PGA Merchandise Show choosing not to conform to the 2010 USGA ruling that prohibits square grooves on the clubface. The company's PVD line is conforming, so now, you have your choice!

"The 2010 groove rule is designed to decrease ball spin for the Tour players and unless you are planning to qualify for the Tour or a USGA event, non conforming grooves can be used until 2024," said Miller. "The new 'SG'™ club line(s) will help you play better and feel much better about your game. In fact, if you are not a Tour player, the new USGA groove rule actually compromises your short game, especially from the rough and bunkers."

Feel Golf is also the innovator of The Reverse Taper Full Release Performance grip. This technologically advanced patented grip can increase distance, improve accuracy, and provide golfers of all skill levels with a better touch and feel. Feel Golf will be launching a redesign of its signature grips to be released in late Spring and is currently pre-booking orders.

Feel Golf's proprietary technology golf clubs have been played by Tour Professionals worldwide including the PGA, LPGA, European, Asian, Champions and Nationwide Tours, as well as by All-American Collegiate Players.