(Riviera Beach, FL) - As the world‟s best golfers turn their attention to this year's Masters, so has IJP Design, as it launches a Limited Edition IJP putter cover. Named "The First Major,‟ the cover is the first in a series of four specially designed putter covers to mark each of this season‟s Majors, some of which include Ian Poulter's own drawings. 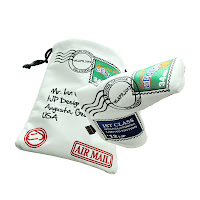 Only 750 Limited Edition putter covers are being produced and each will have their own individually signed and numbered silver tag. Like the new IJP Design Spring/Summer 2012 collection that launched this month, the putter covers are eye-catching in design, featuring Ian Poulter's signature and bright colours from the postal graphics, which were chosen to tie in with Ian‟s recent nickname as "The Postman.‟

The covers will also come with their own protective, lined tote bag. Golfers wishing to order the limited cover can do so now for delivery in time for the Masters 2012 for $70.00 at www.ijpdesign.com.

Mark Truby, Managing Director of IJP Design said, “The Majors offer a great opportunity across the golf season for IJP Design to give its customers something new. With only 750 putter covers being produced, golfers can be sure of an exclusive addition to their golf kit, which will also be in Ian's golf bag at Augusta next week.” He added “Ian loves getting involved with these designs. It's a really great opportunity for him and us to do something a little different.”