On Top of the Planet: Oakley’s Golf Superstar Rory McIlroy Triumphs at the Honda Classic, Overtakes World No. 1 Ranking 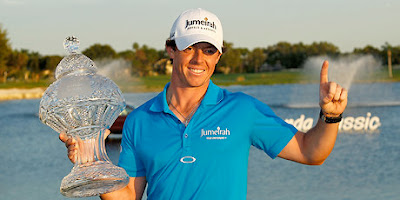 One of golf’s legends knew this day was coming.

A couple years before the flashing lights, mainstream headlines and international fanfare engulfed Rory McIlroy in golf stardom, Tiger Woods sounded off that the youngster from Northern Ireland was destined to ascend to the No. 1 World Ranking.

That moment has arrived. And it came at his expense.

Despite a fiery charge from Woods in the final round of the Honda Classic, Oakley’s superstar was able to fend off the entire talent-packed field in commanding fashion. He shot 69 to emerge triumphant by two strokes for the tournament title…and a stunning view from the top of the planet.

He’s the second youngest player to have taken the sport’s glorious top ranking.

“It’s just great to win this tournament,” said Rory, rocking his Oakley Take Pant 2, high-tech golf polo (featuring Oakley O Hydrolix technology, delivering an innovative moisture management system) and customized golf belt. “I feel like I’ve been so close to winning this year, and haven’t quite got it done. To win today is very satisfying – especially with the added bonus of going No. 1 in the World.”

As always, holding on for victory was no walk in the park.

It wasn’t until the eighth green that Rory became aware of a clawing Woods, who started the day nine shots behind, but made his way up into the fourth position.

“He actually eagled the 18th just as I was lining up my putt on the 13th,” Rory continued. “So I knew that putt was very important – just to get myself an extra shot cushion going through the next few holes.”

Indeed, Woods finished 10-under – by way of a 62, his lowest score ever in a final round in his 15 years on tour. All while Rory had yet to conquer the rest of the PGA National’s treacherous terrain.

Rory held his poise like a seasoned veteran, dropping in an eight-foot birdie on that 13th – followed by some heroic saves on holes 15 and 17. He capped off the performance by making par on the last hole to finish one-under par 69 and 12-under.

“To hold off a field like that…it’s fantastic. It’s a great way to start the year.”

Despite his fifth career win (three on the PGA Tour, including a record-smashing display at the U.S. Open last year), it’s apparent that being No. 1 is still not good enough for Oakley’s young gun.

“I need to keep improving, keep trying to get better,” Rory said. “It’s great to get that No. 1 spot. I realize that if I can win more tournaments like I have today, then the No. 1 ranking should take care of itself.”

There are still more mountains to scale, more trophies to add to his collection. And perhaps more importantly, other elusive things to attain: like a certain “Green Jacket.”

“I’ve got two more tournaments before The Masters, and that’s what I’m building up to.”

One thing is certain: Rory McIlroy is on top of the golf world and he’s only just begun.

An enormous ‘congratulations!’ goes out to Rory from the entire Oakley Global Family on the victory and the World No. 1 ranking,