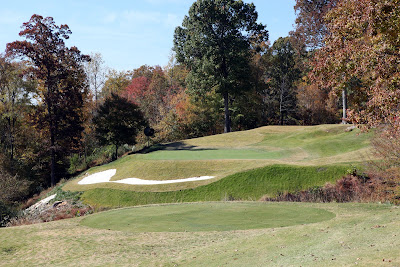 The physical work on the Treyburn golf course began in June 2011 and the club will waste no time showing off its freshly enhanced layout. Treyburn plays host to the prestigious 6th Annual North Carolina High School Invitational April 2, as well as the 52nd North Carolina Amateur Championship on June 14-17.

The extensive renovation done on the golf course allowed McConnell Golf to complete several different projects that not only enhance the layout itself, but also restore Treyburn’s reputation as one of the best golf courses in North Carolina. With these numerous improvements, McConnell Golf members and their guests will enjoy their golfing experience for years to come.

The first and most vital aspect of the project was to replace the decades-old, Penncross bent grass greens with a newer, more heat tolerant 96-2 bent grass — very similar to Crenshaw bent grass — which will provide a much better putting surface during the summer months.

By reseeding the greens, renowned architect and renovation expert Kris Spence and his team were able to rebuild each green to their original specs, while also providing better drainage to each complex. On several greens, they were able to soften severe slopes, providing more pin-able locations.

Tree removal around several greens was necessary to provide more sunlight in the morning hours and allow better airflow on the surfaces, resulting in healthier greens going forward and providing better views on holes such as Nos. 7, 13 and 14.

Another key element in the project was the addition of better irrigation around each putting surface. The new irrigation heads not only allow the greens to be properly watered throughout the year but allow the Treyburn maintenance team, led by superintendant Mark Snell, to better regulate the amount of water in the approach areas. The new state-of-the-art pump station installed during the project will also assist in these controls.

Also, every bunker on the Treyburn golf course has been upgraded with new drainage and the best white sand available, and several new bunkers were added for strategic purposes. In some areas, the bunkers were re-designed or moved to increase their relevance and provide better visual shaping of the holes that is synonymous with Tom Fazio golf courses.

In addition to the new putting surfaces, bunkers, and irrigation and drainage upgrades, Treyburn’s two-decade-old practice facility also received a face-lift. The top two tiers of the driving range hitting areas have been leveled and expanded by 40 percent, and new flagpoles have been installed to provide a cleaner look for the six target greens. The putting green has been completely redesigned with an additional 1,000 square feet of putting surface, providing a better simulation of putts members may encounter on the course. The practice bunker on the left side of the range has also been redesigned to allow for both green side bunker shots and long iron shots to the middle of the practice range.

Finally, expanded chipping and pitching areas have been designed to assist all players with their short game. Necessary modifications that will allow McConnell Golf members and guests a better opportunity to elevate their golf game

“All the renovation work we do allows continuity of excellence between generations of membership,” said McConnell Golf Director of Golf Operations Brian Kittler. “Our members are accustomed to outstanding golf clubs and they want the next generation to inherit an equally outstanding facility. John McConnell takes really good properties, puts in a lot of money and makes them great. He gets them to a whole new level.”

Golf Digest voted Treyburn “Best New Course” when it opened in the late 1980s. Raleigh’s John McConnell and his company, McConnell Golf, purchased Treyburn in December 2006 and today Treyburn is one of eight courses owned by McConnell Golf. Others in the Triangle include Raleigh Country Club and TPC at Wakefield Plantation in Raleigh.