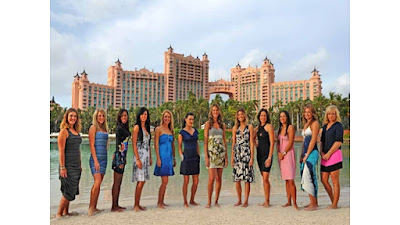 (ORLANDO, Fla.) - Golf Channel's popular Big Break reality series returns May 14 with an all-female cast ready to use serious golf skills, beauty and brains to take that next step in their golf careers. Big Break Atlantis, the series' 17th season, will premier May 14 at 9 p.m. ET.

Shot on location at Atlantis, Paradise Island, Bahamas, Big Break Atlantis will showcase a field of 12 women at different stages of their golf careers -- several are currently playing on the Symetra Tour (LPGA developmental tour), while others turned professional for the series -- who will compete against each other in an attempt to make their lifelong dream of playing alongside the world's top golfers a reality. In addition to other prizes, the winner will receive an exemption to a to-be-announced 2012 LPGA Tour tournament and cash.

The contestants are:
Anya Alvarez (22, Pittsburgh, Pa.) - A fiery competitor on the course, Alvarez has overcome enormous odds off the course. A rookie on the Symetra Tour in 2012, Alvarez qualified and made the cut in the 2011 U.S. Women's Open in her first attempt. She is an outspoken activist and public speaker on raising awareness of sexual abuse.

Shannon Fish (23, Spring, Texas) - Fish turned professional in 2011 following graduation from the University of Texas, posting four top-4 finishes on the Cactus Tour in her rookie year. An intense competitor, she was introduced to the game as a child by her mother and one of the game's all time greats - Jackie Burke.

Natalia Ghilzon (21, Windsor, Ontario) - One of the most athletic competitors on the series, Ghilzon will look to follow in the same footsteps as fellow Windsor native David Byrne, who won the series 15th season - Big Break Indian Wells. After overcoming wrist injuries, Ghilzon enters 2012 healthy and with a new found confidence.

Meghan Hardin (19, Lake Arrowhead, Calif.) - The youngest female competitor in the history of Big Break at age 19, Hardin turned professional just prior to the filming of the series, foregoing her final two years of collegiate golf. A part-time model, Hardin will begin her professional golf career in 2012, competing in Cactus Tour and mini-tour events.

Selanee Henderson (25, Temecula, Calif.) - A tough competitor on and off the course, Henderson is looking to capitalize on her success on the 2011 Cactus Tour (one win and one runner-up finish) to Big Break Atlantis. A natural athlete, Selanee also is the younger sister of former Olympic wrestler and current MMA fighter Dan Henderson.

Marcela Leon (31, Orlando, Fla. / Monterrey, Mexico) - The most experienced competitor in the series, Leon has competed on the Symetra Tour for the past nine years, with five career top-10 finishes and one runner-up finish. She is competing a full-schedule on the 2012 Symetra Tour.

Aubrey McCormick (29, Arlington, Va.) - A free spirit, McCormick hung up the golf clubs in 2011 after struggling on the Symetra Tour and other mini-tour circuits. After working in an office environment, McCormick rediscovered her passion for the game and is beginning 2012 with a fresh outlook on golf.

Zakiya Randall (20, Atlanta, Ga.) - Golfer, model and music producer, Randall turned professional just prior to the filming of Big Break Atlantis, and is determined to make a name for herself in professional golf. Nicknamed "Z," Randall will look to make a statement on the series with her golf game and her fashion.

Gloriana Soto (25, Windermere, Fla. / San Jose, Costa Rica) - The first female professional golfer from Costa Rica to compete in the United States, Soto turned professional immediately following graduation from Texas Tech in 2010, and is scheduled to play a full schedule on the Symetra Tour in 2012.

Christina Stockton (24, Rocklin, Calif.) - Daughter of LPGA teaching professional Becky Herbert Stockton, golf was introduced to Christina at a young age. A four-time all conference player at the University of San Francisco and a part-time model, she turned professional in 2011 and will compete on the Symetra Tour, Cactus Tour and Canadian Women's Tour in 2012.

Kelly Villarreal (29, Birmingham, Ala.) - Nicknamed "The Real Deal," Villarreal is anticipating Big Break Atlantis to be her comeback story. She is giving professional golf another go after giving up on her dreams to compete on the LPGA Tour for a medical sales career five years ago.

The Big Break show concept pits highly skilled golfers against each other in a variety of challenges that test their physical skills and mental toughness. During Big Break Atlantis, one contestant will be eliminated each week, with the last player standing awarded her Big Break, a once-in-a-lifetime opportunity to compete in an LPGA Tour event.