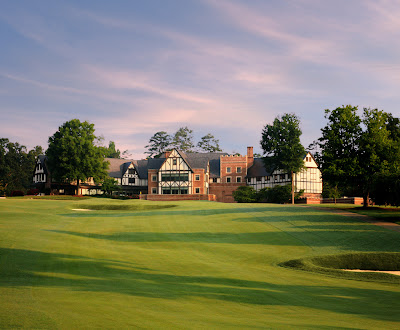 Greensboro’s Sedgefield Country Club unveils new set of green complexes featuring a more heat-resistant strain of grass for the Wyndham Championship in August
(RALEIGH, N.C.) — When McConnell Golf purchased Greensboro's venerable-yet-aging Sedgefield Country Club in early 2011, its new owner recognized significant improvements to the longtime host site of the PGA TOUR‘s Wyndham Championship would be necessary in order to help restore the club to its former glory. Numerous, well-publicized upgrades were made prior to the 2011 Wyndham Championship, while others are ongoing.

Now, with an eye on having Sedgefield's Donald Ross-designed golf course ranked among the state’s Top 10 within the next five years — and preventing the club’s maintenance staff from having to worry about hot weather and its effects on bent grass greens every summer — McConnell Golf CEO John McConnell has announced that Sedgefield will convert its green complexes to a more heat-resistant strain of Bermuda grass.

McConnell said the decision followed considerable research and after his company sought the advice of its maintenance supervisors and Sedgefield’s advisory board. Sedgefield will close the golf course on May 14, and McConnell promised the facilities would be in pristine condition prior to the August 16-19 Wyndham Championship.

"It is my conclusion that Bermuda greens will become the norm for the golf putting greens in the Carolinas," said McConnell in a letter to the Sedgefield membership, in which he also said the total project is estimated to be a $400,000 investment in club improvements.

Bobby Long, chairman of the Piedmont Triad Charitable Foundation Board of Directors, issued the following statement on behalf of the Wyndham Championship: “This news is fantastic for the members of Sedgefield Country Club," said Long. "They already had a beauty of a golf course, but now John McConnell is shining it up so it can truly reveal itself. People tend to think the greens should be soft so a player can scream a low 3-iron into a green and have it stick, but that is not what Donald Ross had in mind when he designed this golf course.

“Bermuda greens will transform Sedgefield into a true test of golf, and we are ecstatic that John has made this decision,” said Long. “Sedgefield is one of the finest courses in North Carolina, and we are honored to play the Wyndham Championship on such a wonderful course.”

In addition, PGA TOUR golfer and two-time Wyndham Championship winner Davis Love III said he was equally pleased about the decision: “Changing the Sedgefield greens to Bermuda grass is great news for the members at Sedgefield, but it’s also great for the Wyndham," said Love, who in September will captain the U.S. Ryder Cup squad. "I thank Mr. McConnell for having the vision and leadership to make this change. The new greens will allow the course to be played the way Donald Ross intended most of the year. I look forward to playing Sedgefield’s new greens in August.”

2011 Wyndham winner Webb Simpson offered similar thoughts: “With Bermuda greens, Sedgefield becomes one of the great golf courses on the PGA TOUR," said Simpson. "Even in the heat of August, the greens will be hard and fast, and that means the course will play much tougher. I think it's safe to say that the days of 20-under par are over. I’ve always loved Sedgefield, but I’m really looking forward to playing the Wyndham this August on the new greens.”

For John McConnell, the big question was not “if” but “when.” In his letter to the Sedgefield membership explaining the timing of the greens renovation, McConnell mentioned the long list of items at Sedgefield that were in need of repair and maintenance when McConnell Golf took over ownership, and that the company was steadily reducing that list as it strives to complete these property improvements.

"The [new Sedgefield] activities building currently under construction will be a gem when completed," McConnell said. "Each time I visit I am impressed with all the design detail and functionality that this building will offer our members. I can hardly wait to sit on that patio and watch the birdies being made on No. 9. The Boardroom will be updated this spring with new furnishings and audio visual equipment so I hope these changes will be beneficial to future business meetings held at the club."

McConnell said that Sedgefield’s golf course is a prime candidate for a changeover to Bermuda because there is a minimum of tree cutting that needs to take place, and that green complexes would not need to be rebuilt. Therefore, the bent grass could be quickly burned out and Bermuda sprigs planted that will grow quickly in the hot summer months.

"[Sedgefield] enjoyed great greens last summer due to a mild July and August, but I vividly remember how the previous summer had left these same putting surfaces very stressed," said McConnell in his letter. "Many other North Carolina golf courses have converted to Bermuda greens or are in the process of converting so we need to get on board with the future of golf in our region.”

McConnell said that in addition to changing the grasses on the greens, the company would be doing other work to the course as well. Golf course architect Kris Spence will oversee the project, which will include enlarging the second green in the back for a better pin position and modifying the front of the 17th green. Spence will also oversee adding bunkers to holes 5 and 15 to better reward great shots and penalize bad ones on the tournament’s two par-5s.

"I would like to stress that we are making this decision for the benefit of Sedgefield’s long term facility improvement plan without any influence from the Wyndham Championship and the Piedmont Triad Charitable Foundation," said McConnell. "Certainly the tournament and the PGA TOUR players will prefer to play Bermuda greens in August’s heat and it will be interesting to see what the winning scores will be in the future with the new greens. Sedgefield’s golf course deserves better than having these skilled players shoot 21-under on our beautiful old layout.

"Bottom line is when you consider the long term maintenance savings that these Bermuda greens provide, this is a decision that is easy to make. And having other McConnell Golf courses in close proximity to play, we hope the inconvenience for our golfing members this summer will be minimal."