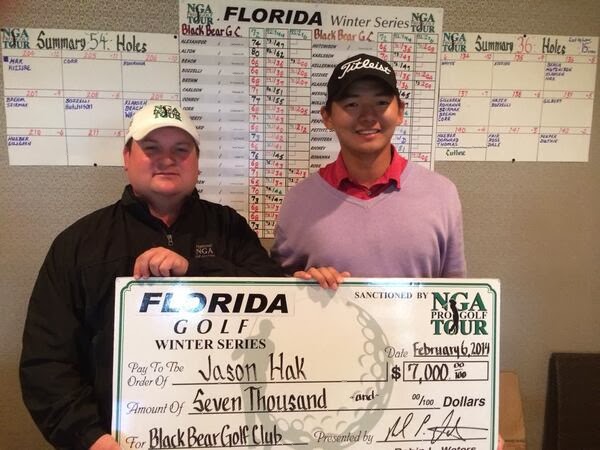 (Eustis, Florida) – James White Jr, a Palmer Cup team member, Byron Nelson Award Winner, and two-time All-American during his time at Georgia Tech, held the lead going into the final day of the NGA Tour Florida Winter Series event at Black Bear Golf Club in Eustis, Fla. However it would be another Yellow Jacket star, Shun Yun “Jason” Hak, who would grab the win after putting together three consistent rounds and surviving a playoff against one of the NGA Tour’s regular season best, Patton Kizzire. Hak shot 4 under par 68 all three rounds, for a 12 under par 204 stroke total, forcing the playoff with Kizzire. Hak would par the first hole of the playoff to earn the win, his first as a professional. Kizzire, who starred at Auburn, shot rounds of 67, 68, and 69. This was Kizzire’s first event of the New Year.

Hak, the consensus number one ranked junior golfer and 29th ranked amateur in the world when he signed with Georgia Tech in the spring of 2012, finished tied for 46th at the European Tour’s UBS Hong Kong Open in 2011 and broke Sergio Garcia’s record for youngest player to make a European Tour cut when he did so at the 2008 Hong Kong Open. He turned professional in the summer of 2013 after just one season of college golf at the powerhouse that produced NGA Tour alumni and PGA TOUR stars Stewart Cink, Roberto Castro, and Chesson Hadley. He made his professional debut at last year’s NGA Tour Honda Powersports Classic in Florence, S.C. where he missed the cut. With his first professional win coming less than just 6 months after his decision to go pro, it hasn’t taken him long to find success as a professional. With no PGA or Web.com Tour status, Hak will compete on the NGA Tour Pro Series, the top developmental tour in the USA, for the 2014 season along with his fellow Tech alum White.

White, a member of the NGA Tour Pro Series in 2013, shot a final round 3 over par 75 which dropped him to 7 under par, out of the lead, and into a tie for 9th. White was also a participant in last season’s Honda Powersports Classic but had a little better success. He finished tied for the lead but lost in a playoff to eventual NGA Tour Player of the Year Jon Curran, costing him his first NGA Tour win. White would get that first win a month later at Orange County National in the NGA’s Q School Prep Series. His T9 finish at Black Bear put him into 7th place on the final NGA Florida Winter Series qualified money list. The top 10 finishers on the final NGA Florida Winter Series qualified money list
receive free membership onto the 2014 NGA Tour Pro Series. Others finishing inside the top 10 include Michigan State’s Ryan Brehm (2nd) and Louisville’s Sebastian Szirmak (3rd)- who both finished tied for 5th at Black Bear, Jacksonville State alum and 2011 NGA Tour Player of the Year Jeff Corr (4th)- who finished a shot back of Hak and Kizzire in 3rd at Black Bear, Indiana U’s Brant Peaper (5th), Florida Southern’s Brian Richey (6th), Uli Weinhandl (8th)- the only Austrian to ever win on the NGA Tour, Laval Universite’s Mathieu Gingras (9th), Duke star Michael Schachner (10th), and Eastern Michigan alum Chris Ross (1st).

Ironically the cut at Black Bear would be the first one missed by Ontario’s Ross in a 3 day NGA Tour Winter Series event since the first event of the season at Stoneybrook. Ross, who put together three consecutive wins from December to January, dominated the Winter Series this season taking home the Money Title with just under $40,000 in earnings. The only other player to put together 3 consecutive wins on the NGA Tour in a season was Zach Johnson during his 2001 Player of the Year campaign. With his Winter Series performance, Ross has gotten off to a fast start in the Race for the 2014 NGA Tour Player of the Year and can be found competing on the NGA Tour Pro Series in 2014 as well.

The NGA Tour would like to thank the staff and volunteers at Black Bear Golf Club for hosting such a great professional event. The NGA Tour Florida Winter Series has concluded for the 2013-2014 season. The NGA Tour turns its attention to the start of the 2014 NGA Tour Pro Series, the NGA’s premier professional tour, beginning March 1st and 2nd with the Members Only Shootout at host Kinderlou Forest in Valdosta, Ga. Kinderlou Forest also host the Web.com Tour South Georgia Classic in April.

Memberships for the 2014 NGA Tour Pro Series are still available at this time. If interested, contact the NGA Tour offices.

For more information on the National Golf Association, the NGA Tour Pro Series, or the NGA Tour Florida Winter Series please visit www.ngatour.com or call the tour offices at 800-992-8748.