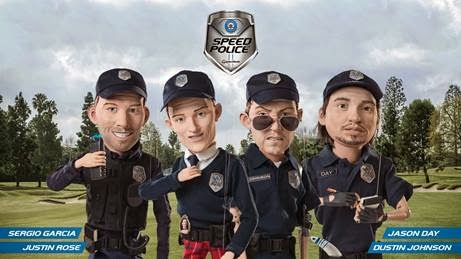 (CARLSBAD, Calif.) – TaylorMade Golf Company, makers of the No. 1 driver in golf, is unleashing the “Speed Police” in a new advertising campaign designed to ensure golfers everywhere are not playing outdated metalwoods.

The campaign, from Los Angeles-based creative agency Zambezi, is another example of TaylorMade’s willingness to push boundaries with its advertising.  The Speed Police campaign reminds consumers that golf is fun, and hitting the ball a mile with JetSpeed metalwoods makes it even more fun.  The campaign launches today on television, print and online.

“Golfers have heard every tech claim and distance-enhancing pitch in the book.  Our goal was to bring some ‘fun’ and energy back to golf with a campaign that delivers a compelling product message and makes you stop and say ‘what just happened,'” said Bob Maggiore, CMO at TaylorMade Golf.  “The use of these marionettes is a departure from traditional golf advertising and chances are you're going to remember what they have to say about faster metalwoods.”

The production team at Hornet Inc. sculpted amazing portrayals of the four PGA Tour pros to create the Speed Police with a level of craftsmanship that brought life and reality to the characters.  Each character’s personality is based on their human inspiration.  Officer Johnson is a hard charger, Officer Rose is well dressed and proper, Officer Day is classic Australian and the easy going Officer Garcia is along for the ride.

“Every major stick and ball sport is given license to push their storytelling to the brink of insanity, but people never expect the same kind of disruption from a golf brand’s advertising,” said Kevin Buth, Creative Director at Zambezi. “In a sport that desperately needs fresh air, TaylorMade definitely isn't afraid to push the status quo.”

The new TaylorMade JetSpeed family of metalwoods is available now at retail. For more information on JetSpeed, visit taylormadegolf.com.
Posted by Blogger at 1:16 PM