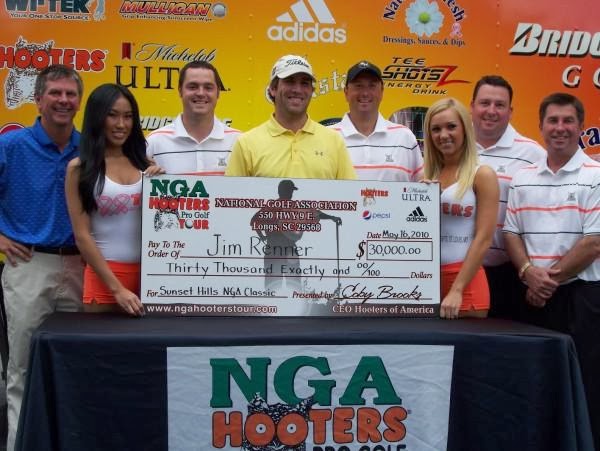 (Pebble Beach, Cal.) – 2010 NGA Tour grad Jim Renner put together 4 solids rounds (65-73-72-67) in the PGA Tour AT&T Pebble Beach National Pro-Am to finish at 10 under par for the event, earning him a tie for 2nd place, and the top spot among 69 NGA Tour alumni in the championship field. Renner, who started the final round in 5th place, made up 7 shots on third round leader Jimmy Walker, who shot a final day 74. The 7 shots would leave Renner one short of forcing a playoff with Walker, who held on for the win. Renner earned $580,800 for the runner-up finish but the second place check wasn’t the only prize he received for the week. Renner, along with his amateur partner Consolidated Restaurant Operations CEO John Harkey Jr, won the pro-am portion of the event. Renner and Harkey shot an eleven under par final day 61 to make up 6 shots and post a one stroke victory over Rory Sabbatini and Toms Shoes founder Blake Mycoskie, who posted a final round 68.

Fellow 2010 NGA Tour grads Michael Thompson and Will Wilcox also had good showings in the event. Thompson, the 2010 NGA Tour Player of the Year, tied for 19th with fellow NGA alums Jason Kokrak and Roberto Castro while Wilcox, the 2010 NGA Tour Rookie of the Year, fell into the category of cut made did not finish with five other NGA alums, the category where players made the cut but are not allowed to play Sunday due to the excessive numbers. Kevin Na, a past winner on the NGA Tour California Series, finished tied for 4th while alum Chesson Hadley, the 2013 Web.com Tour Championship winner, finished T10. Another former NGA Tour Player of the Year Will MacKenzie finished T13. A quartet of NGA Tour alums finished tied for 27th including 2008 NGA Tour Rookie of the Year Russell Knox, Jim Herman, Robert Garrigus, and 2012 NGA Tour grad Andrew Loupe. Loupe, a rookie on tour this season, made noise by shooting an opening round 63 and grabbing the 1st round lead.

2013 NGA Tour member Lucas Black, the star of such films as 42, Fast and the Furious Tokyo Drift, and Seven Days In Utopia, also competed in the event, only as a celebrity. Black partnered with tour winner and 2006 NGA Tour alum Blake Adams. While they were unable to make the cut in the team competition, Adams managed a tie for 45th in the pro competition. Altogether 30 of the 69 NGA Tour alums competing in the event made the cut.

For more information on the National Golf Association or the NGA Pro Golf Tour Pro Series, visit www.ngatour.com or call the tour offices at 800-992-8748 or by email Joy@NGATour.com for Player Administrator Joy Johnson.
Posted by Blogger at 6:39 PM