(Naples, Fla.) – The newly remastered Gold Course at Tiburón Golf Club at the Ritz-Carlton Golf Resort in Naples, Florida is set to host two professional golf events over a three-week span, including the LPGA Tour’s CME Group Tour Championship November 17-20  and the PGA TOUR-sanctioned Franklin Templeton Shootout December 8-10. The Gold Course will then reopen for member, guest and daily-fee play on December 12. 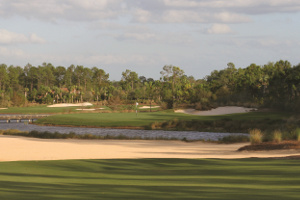 Tiburón’s Gold Course has been remastered by the Greg Norman Golf Course Design team, undergoing extensive greens, turf, irrigation and bunker renovations since May of 2016. Fairways have been re-grassed with celebration Bermuda grass, while greens now feature tiff eagle Bermuda. Green surrounds have also been expanded to present more shot options for golfers.

When Norman returned to touch up his Tiburón masterpiece, his design team reconstructed many of the original stacked sod wall bunkers with a striking new synthetic sod wall bunker system by Durabunker. Tiburón is the first LPGA and PGA TOUR venue to use the new Durabunker product.

“We felt the Durabunker option was the perfect fit here and we have hopes it will be a strong investment for many years to come,” said Jeff Cathey, director of agronomy, Tiburón Golf Club. “We are excited about the potential longevity in the Durabunker wall construction and sustainability of the sod wall look along with the opportunity to maintain Greg Norman’s design intent.”

The LPGA Tour’s CME Group Tour Championship has been hosted at Tiburón since 2013. Cristie Kerr is the defending champion of the event. The PGA TOUR's Franklin Templeton Shootout has been played at Tiburón since 2001. PGA TOUR stars Jason Dufner and Brandt Snedeker are scheduled to defend their title. The Gold Course originally opened for play in 1998.

“The Gold Course at Tiburón has always been a great layout,” said Kevin DeDonato, PGA, general manager, Tiburón Golf Club at the Ritz-Carlton Golf Resort. “The recent enhancements have really helped to improve the overall conditions and playability of the golf course. The Tiburón team has done an incredible job of getting the golf course and facility tournament-ready and set to host some of the best players in the world.”

For additional news and information, visit www.Troon.com.
Posted by Blogger at 9:53 AM