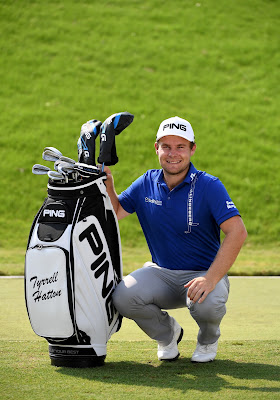 The 25-year-old finished runner up at the just-completed DP World Tour Championship in Dubai and has amassed nine top-10 finishes on the European Tour this year, including a T5 at the Open Championship and a T10 at the US PGA Championship.

“Tyrrell has had an outstanding year and we’re delighted he’ll be representing PING going forward,” said PING Chairman & CEO John A. Solheim. “We’ve watched him very closely since he joined the European Tour two years ago and we’ve been impressed with every aspect of his game. He had two top-10 finishes in major championships this year, which says a great deal about his ability to compete against the best in the world. He’s a great addition to our global tour staff and we look forward to supporting him as he continues his rise in the game.”

En route to his maiden European Tour title at the Alfred Dunhill Links Championship in October, Hatton matched the course-record with a 10-under round of 62 at the St. Andrews Old Course using a PING Vault Oslo putter for the first time. He also relied on a PING G driver and i irons.

Hatton’s stellar 2016 season saw him finish 4th on the European Tour’s Race to Dubai while climbing to 24th in the Official World Golf Ranking, an accomplishment which will see him make his Masters debut next year.

“I’m delighted to be officially representing the PING brand. I’ve chosen to play their equipment in the past, and I’m excited to become part of the PING family,” Hatton said.

“I won my first European Tour event this year after putting a PING putter in my bag for the first time. With PING clubs, I believe I have the finest tools available to perform at the highest level. Each club is precisely built to my specifications which gives me great confidence on every shot.”

As part of a multi-year agreement, Hatton will wear a PING hat, use a PING staff bag and play a minimum of 11 PING clubs, including a PING driver and PING putter.