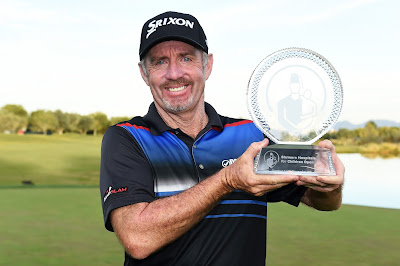 (HUNTINGTON BEACH, CA) – Srixon and Cleveland Golf are staying red hot on the PGA TOUR. Congratulations to staffer Rod Pampling, who won the PGA TOUR Shriners Hospitals for Children Open over the weekend at TPC Summerlin in Las Vegas, Nevada. Pampling opened with a scorching round of 11-under-par 60 and closed with a final-round 65 en route to a 20-under-par total, two clear of the field. Needing birdie on the last hole to finally hold off his nearest competitors, Pampling drained a 32-foot birdie putt to clinch the win.

It’s the third career PGA TOUR win for the 47-year-old Pampling. The native of Queensland, Australia, hadn’t won on the circuit since the 2006 ARNOLD PALMER INVITATIONAL, and he hadn’t captured any professional title since the 2008 Australian Masters.

“It’s extremely rewarding,” said Pampling. “Winning Arnold Palmer’s event is still on top. But coming back from what we’ve had the last few years, to get a win under the belt, it’s phenomenal. Amazing.”

Pampling now owns seven career professional wins, with the Shriners title representing the largest check of his career – $1,188,000. He moves to fourth in the PGA TOUR FedEx Cup standings.

Pampling trusted the high-performance Srixon Z-STAR XV golf ball, with unmatched feel and distance, on his way to victory. He ranked first in the field in Strokes Gained: Around the Green and second in Strokes Gained: Approach-the-Green, a testament to his stellar scrambling and iron precision.