(JUPITER, Florida) – H4Events USA (www.h4events.com), which organizes and conducts golf-related travel experiences in the U.S. and France, has concluded the 2016 Alliance Golf Cup, a collegial golf tournament which took place Oct. 27-29 at Jonathan’s Landing Golf Club, in Jupiter, Fla. The third annual Alliance Golf Cup was played at The Fazio at Old Trail, an 18-hole course which has been described as one of Tom Fazio’s best designs and is considered the true championship course at Jonathan’s Landing. This event was won this year by the international team, bringing the won/loss record to 2-1 in favor of the U.S. team. 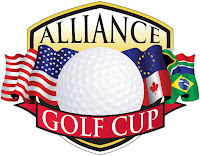 “This year’s Alliance Golf Cup was a triumph,” said Laurent-Alix Huguet, founder and CEO of H4Events USA and the Alliance Golf Cup. “Individual and group golf instruction, as well as a spirited two-day competition, resulted in a memorable event for all.”

The U.S. team and the international team, each featuring golf professionals and avid amateurs, competed vigorously for the 2016 Alliance Golf Cup trophy, but with plenty of enjoyment and camaraderie all around. The captains were Patricia Meunier-Lebouc, international team, and John Means, U.S. team.