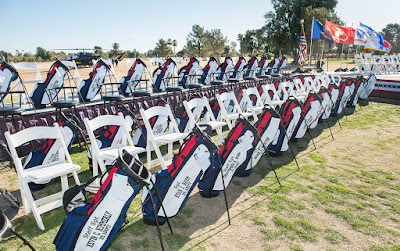 (PHOENIX, Ariz.) – The collegiate golfers participating in this year’s Patriot All-America Invitational, to be played December 27-31 at The Wigwam Golf Club in Litchfield Park, Ariz., will once again be playing for more than just themselves or their school. Participants will be playing in honor of a fallen or severely wounded soldier and carrying a golf bag with the name, rank, branch and story of their military member written on it.

The Patriot All-America has been honoring fallen or severely wounded soldiers in this unique way since the event’s inception in 2011 and it continues to have a deep impact on the young golfers.

“Having the name of a fallen soldier on your bag and playing for them, it means a lot,” said University of Southern California junior golfer Sean Crocker. “This event is more than just another tournament.”

“Playing in The Patriot has truly changed the way I look at the game of golf,” said former University of Michigan golfer Chris O’Neill. “When you hit a bad shot, it’s not the end of the world, it was a bad golf shot. I’m honored to play in this event and to do my best for MORE than myself.”

The idea of the inscribed golf bags was the brainchild of Gregg Grost of the Golf Coaches Association of America. In cooperation with the Folds of Honor Foundation, the golfers receive their special golf bag at the event’s opening ceremony with the name and branch of service of a fallen or injured military member whom they shall represent. Participants also receive a card with the soldier’s story, so they can be familiar with who that person was, what they represented and how they were killed or wounded in action.

“The connection that these players make with the names on their bags, the families behind those names and the soldiers that sacrificed for us, we realized very early on that THAT was what this event was all about,” said Tom O’Malley, Chief Operating Officer, JDM Partners.

At the conclusion of the tournament, the golf bags are shipped to players’ schools and auctioned with all proceeds benefitting the Folds of Honor Foundation, which provides post-secondary educational scholarships for children and spouses of military service men and women killed or disabled while in active service. To date, more than $73,500 has been raised for Folds of Honor through auctioning of the golf bags.

About The Patriot All-America Invitational
Featuring golf’s stars of tomorrow, The Patriot All-America is regarded as a top amateur event nationally, attracting PING All-America golfers from all three NCAA Divisions, NAIA and NJCAA rankings as well as from universities outside the United States.  The Arizona Golf Association (AGA), JDM Partners and the Golf Coaches Association of America (GCAA) partnering with the Folds of Honor Foundation to host the tournament.

The 2016 Patriot All-America Invitational collegiate golf tournament will be played December 27-31 at The Wigwam Golf Club in Litchfield Park, Ariz.  A field of 84 top amateur players will compete in a 54-hole, stroke-play competition on The Wigwam’s famed Gold Course. Competitive rounds will be played December 29, 30 and 31 with a champion crowned at approximately 4 PM on New Year’s Eve.

Invitations to The Patriot All-America are primarily based on individuals earning PING All-America honors the previous season in NCAA Divisions I, II and III as well as the NAIA and NJCAA Divisions I and II. Additionally, a member from each of the nation’s military academies are invited as well as GCAA national award recipients, members of the most recent Arnold Palmer Cup Teams and AJGA All-Americans and Toyota Junior Golf World Cup participants currently enrolled in their freshman year of college.

About Wigwam Golf Club
The Wigwam’s three 18-hole championship golf courses offer a diversity that cannot be matched by any other Arizona resort. Here, the golf enthusiast has their pick of not just one or two courses, but three 18-hole courses – 54 holes of championship golf including two courses designed by the legendary Robert Trent Jones, Sr. And, in true Wigwam style, each course – The Gold, Patriot, which just celebrated their 50th anniversaries, and Heritage – offers a unique challenge that adds spice and variety to one’s stay at this timeless and relaxing retreat. In December 2009, The Wigwam (including the golf courses and resort property) was purchased by JDM Partners, led by sports icon Jerry Colangelo.

The Gold Course has hosted many signature tournaments over the years, including numerous U.S. Open Qualifiers, U.S. Amateur Qualifiers, several NCAA Regional Championships and the annual Patriot All-America Invitational, one of the top amateur competitions in the world. The 7,430 yard, par 72 course has also received various industry awards and accolades since opening in 1965, including being named one of the “Top 100 Golf Courses in America.” For more information, visit www.wigwamgolf.com.
Posted by Blogger at 11:33 AM

Bluehost is ultimately one of the best hosting company with plans for any hosting needs.