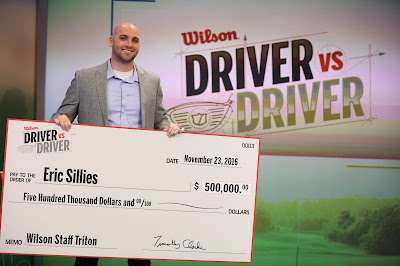 Sillies’ Driver Concept – Wilson Staff Triton – to Go on Sale at More Than 1,000 Retail Stores Throughout the U.S. on Black Friday (Nov. 25)

(ORLANDO, Fla.) – A year and a half after sending in his initial application and driver design idea, Eric Sillies (Cincinnati, Ohio) was crowned as the winner on Tuesday’s finale of Driver vs. Driver presented by Wilson. Sillies receives a life-changing grand prize of $500,000 and his driver concept – Triton – becomes Wilson Staff’s newest driver, officially going on sale at more than 1,000 retail and golf course pro shop stores throughout the country on Friday, Nov. 25 (Black Friday). The driver is available for purchase online at DrivervsDriver.com. 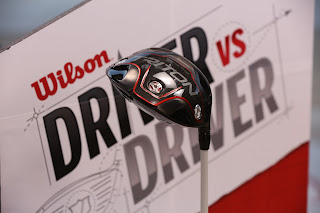 “It is amazing to hold the half a million dollars in my hands," said Sillies after being announced as Driver vs. Driver winner. “I would not be standing here today without Wilson LABS. It’s been an incredible journey, and I couldn’t be happier and more thankful.”

SERIES PREMISE: Wilson Golf issued an open call and declared an unprecedented challenge to develop an innovative concept that could be transformed into Wilson Golf’s newest driver. Driver vs. Driver gave viewers an exclusive inside look at the golf club design process from taking prototypes to reality, at the company’s Global Headquarters in Chicago and its manufacturing facility in Southeast Asia to on-location at various golf events, where PGA TOUR professionals and stars from the world of sports and entertainment tested several of the driver concepts. The series judges – former NFL linebacker Brian Urlacher, former USGA technical director Frank Thomas and Wilson Golf president Tim Clarke – shared their personal perspectives of the Driver vs. Driver experience on Tuesday’s finale before unveiling the winner. Sports broadcaster Melanie Collins hosts Driver vs. Driver.
Posted by Blogger at 12:22 PM