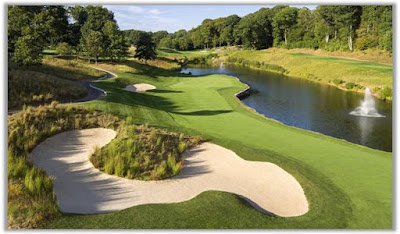 (Milford, CT) — Great River Golf Club in Milford, Conn., opened in 2001 to rave reviews by the major national golf publications and was heralded as one of the best public-access golf courses in the country. Sacred Heart University in Fairfield, Conn., acquired the struggling semi-private club in December 2015 and has since embarked on a new visionary blueprint to reestablish Great River’s prominence as one of the premier golf facilities in the state and the region.

Sacred Heart University’s long-term commitment to Great River has brought financial stability to the club and investments in course upgrades are ongoing. A number of tees are being leveled, several penal bunkers will be eliminated to increase speed of play, a few trees have been removed and cart paths were resurfaced. The routing of the original front and back nine holes by award-winning architect Tommy Fazio was restored in 2016, and immaculate course conditions rival those of the area’s most prestigious private clubs.

As part of the transition, Great River now is the home course for Sacred Heart’s NCAA Division I men’s and women’s golf programs, and the future plan is to host NCAA tournaments to showcase the course and challenge the best collegiate golfers. The school, which is enjoying explosive growth, offers an enviable number of competitive athletic programs overseen by the legendary former baseball manager Bobby Valentine who serves as the executive director of athletics.

“Sacred Heart’s new vision for excellence and value at Great River already has created excitement among area golfers,” says Great River’s executive director Mark Appelberg. “Great River offers an exceptional golf experience on an elevated site that provides stunning views and holes that play along the banks of the Housatonic River. We are striving to deliver a first-class private club environment, and our variety of new membership packages have great appeal. Great River, in this new chapter, is poised to become one of the area’s most sought-after home clubs.”

Great River is recapturing its national prestige as a must-play experience. Sacred Heart University’s commitment to quality and integrity in its stewardship of the club assures its destiny as one of the country’s great collegiate golf facilities. For more information about Great River and memberships, visit www.greatrivergolfclub.com or call (203) 876-8051.
Posted by Blogger at 9:11 AM