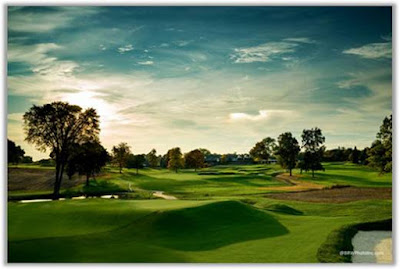 (Northville, MI) — The legendary Meadowbrook Country Club in suburban Detroit has announced that the golf course renovation work by Andy Staples Design has been completed. The grow in has been underway on all the greens, tees, fairways and roughs and, based on weather conditions over the next six months, the club is planning for a grand re-opening in mid-May.

One of the area’s historic private golf clubs, Meadowbrook Country Club embarked on a major renovation of its historic 1916 course to mark the milestone occasion of its 100th anniversary. Originally designed by Scottish classic architect Willie Park, Jr., with a later contribution by the renowned Donald Ross, Meadowbrook will soon unveil a refreshing new look thanks to Arizona-based Andy Staples Design.

“I am astounded at the quality of the grow in and how well the place has established,” said Staples. “There are 12-14 holes ready for play already, and the last holes are not far behind. With a friendly winter and a warm spring, we’ll be open on time. I’m also blown away with the views across the property and how each hole now allows for strategic views from one hole to the next, taking advantage of the dramatic topography.”

Amongst the membership, the greens are the most talked about aspects of this redesign. The intention was to make them difficult, but interesting. The architect’s plan was to keep consistent speeds known as “Meadowbrook speed,” rather than posting stimpmeter readings or discussing green speeds in terms of numbers.

“Our Pure Distinction greens will be some of the best in the metro area,” said club general manager, Joe Marini. “The club’s decision to move ahead with this project is paying off and is positioning us as one of the leaders in how a renovation should be done.  Our design team did a spectacular job.”

According to Staples, “With the addition of more bentgrass on the fairways, approaches and green surrounds, the course will provide more options of play, and be a course golfers will need to think their way around. There is no doubt in my mind that Meadowbrook will be one of the most unique clubs in the area. I’m honored to have been a part of it.”

For more information, visit www.meadowbrookcountryclub.com.
Posted by Blogger at 3:31 PM