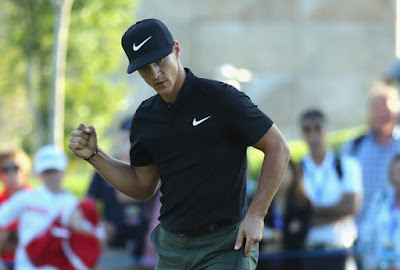 (RELEASE) - Thorbjørn Olesen secured the biggest win of his career after a stunning display at the Turkish Airlines Open in Antalya.

The 26-year-old — who shot a course record 62 on Friday — notched an impressive 23 birdies and one eagle during the four days, and held his nerve during the final round to sign for a winning score of 20-under-par, three strokes clear of his nearest competitor and fellow Nike athlete Hao-Tong Li, at Regnum Carya Golf & Spa Resort.

“I hadn’t been in great form recently, but I always back myself to turn it around and that’s what I did this week. It’s a great feeling to get the win, and gives me a big confidence boost going into the next two tournaments,” says Olesen.

The win has elevated the Dane to 9th spot in The Race to Dubai standings ahead of the next installment of The Final Series where Olesen will tee it up at the Nedbank Golf Challenge in Sun City, South Africa.

Olesen sported apparel from the Nike Performance collection – including the Nike MM Fly Swing Knit Stripe Alpha polo - and also relied on the stability and comfort of the Nike Lunar Control 4 footwear.