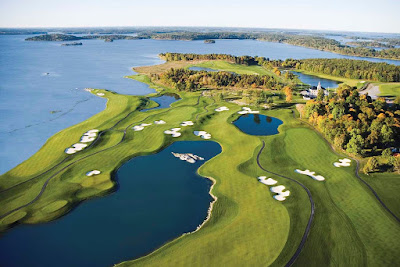 Named No. 1 in the entire region is the Stadium Course at Sweden’s Bro Hof Slott Golf Club, an RTJ II design that debuted in 2008 and is home to the Scandinavian Masters of the European PGA TOUR.
Four RTJ II courses were named to the Top 10, with a total of 10 RTJ II courses included in the overall Top 100 for the region, which included Denmark, Iceland, Finland, The Netherlands, Norway and Sweden.

“It is an honor to be among the golf courses recognized on this distinguished list,” said Robert Trent Jones, Jr., Chairman and Master Architect, who is unrivaled among golf course architects in the global marketplace, from the Americas to Europe to Asia. “We are proud of our work in this special part of the world.”

These are the latest honors for RTJ II courses, which have appeared on all of the most respected “best of the best” rankings worldwide for the past five decades. RTJ II remains passionate and committed to building environmentally responsible golf courses that are challenging, innovative, and enjoyable to play.

“We use our vision to reveal and sculpt each course inherent to its site so golfers can enjoy the challenges and wonders of the game,” Jones said. “We believe that preserving the natural beauty of the site contributes to the pleasure of the golfing experience.”

While delighted to have his Bro Hof Slott design ranked No. 1 overall, Jones is particularly proud that Norway’s Miklagard Golf Club – the first world-class golf course built in Scandinavia – remains so highly regarded, given the number of courses built since its debut in 2002. Miklagard is one of many RTJ II ground-breaking projects, which include Moscow Country Club, the first 18-hole golf course in Russia, and Spring City, in Yunnan Province, the #1 resort course in China.

RTJ II golf courses have hosted tournaments on every major golf tour in the world – most recently the 2015 U.S. Open Championship (Chambers Bay) and 2016 U.S. Women’s Open Championship (CordeValle). They have also hosted special events such as the World Cup of Golf, The Skins Game, The Grand Slam, and many others. More than 100 of RTJ II’s courses have played host to such events.
Posted by Blogger at 11:59 AM