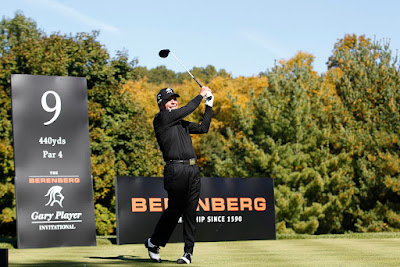 (New York, N.Y.) - The Berenberg Gary Player Invitational concluded yet another successful event with some of the biggest names in golf, business and entertainment, which celebrated the Union of Golf and Giving with golf icon and Grand Slam champion Gary Player. The 2015 global invitational series has been extra special with the Black Knight celebrating the 50th anniversary of his career Grand Slam and his 80th Birthday, while title sponsor Berenberg celebrated their 425th anniversary.

Participants joined in the fun and giving during a gala auction after an exciting day of golf, and later Gary Player, The Player Foundation and presenting sponsor Berenberg donated a significant contribution during the Gala Dinner. The day’s festivities raised $212,000  for The Player Foundation, which aids the betterment of impoverished communities and the expansion of educational opportunities around the world.

The team led by Chi Chi Rodriguez had a winning score of 16 under par and was crowned champion of the 2015 Berenberg Gary Player Invitational at GlenArbor Golf Club.

“I am very pleased by the success of the event and the funds we were able to raise for The Player Foundation,” said Gary Player. “Our continued support towards impoverished communities around the world would not be possible without the generous contributions made by our sponsors and field of participants.”

Hendrik Riehmer, Managing Partner at Berenberg commented, ”The strong turnout was a great way to celebrate our 425th anniversary this year and Gary Player’s Grand Slam anniversary and 80th birthday. It is important to help make a difference for underprivileged children around the world.”

Marc Player, CEO of Black Knight International and GPI series founder, added, “I applaud Berenberg for their continued support in being our title sponsor.  We would not be able to achieve the fundraising success we have without them and their involvement has been a big factor in shaping our success.”

The Berenberg Gary Player Invitational forms part of the world-leading charity golf event series, which has raised more than $60 million for charities worldwide. The benefiting charity for the U.S. event was The Player Foundation, whose goal is to donate $100 million by 2020 to the support of children’s charities, the betterment of impoverished communities and the expansion of educational opportunities throughout the world.

The 2015 series will continue later this year in South Africa, Abu Dhabi and India.
Posted by Blogger at 10:16 AM