(HUNTINGTON BEACH, CA) – Srixon and Cleveland Golf congratulate staffer Smylie Kaufman for his victory at the 2015 Shriners Hospitals for Children Open held at TPC Summerlin Golf Club, in Las Vegas, Nevada.  The 23-year-old rookie from Birmingham, Alabama, rallied from seven shots back to card a 10-under 61 in the final round to capture his first PGA Tour victory in just his fifth PGA Tour start.  Kaufman had an eagle and seven birdies in the last 11 holes of the tournament to finish with an overall score of 16-under 268, just one stroke ahead of six other competitors. 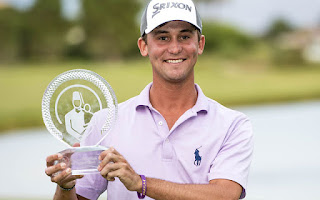 “I was just hitting it so good the last few days and just wanted to give myself a chance to post a number, and that’s what it came down to,” said Kaufman.  “It feels unbelievable.  A lot of hard work and dedication has gone into this, and I’ve had family and friends that have been supportive the whole way.  For me to have a group of people that believes in what I do, it just makes it that much easier and this moment that much more special.”

Kaufman’s victory at the Shriners Hospitals for Children Open, which is the second tournament on the PGA Tour’s 2015-16 schedule, earned him a winner’s check of $1,152,000, while also securing him trips to the 2016 Masters, Players Championship and PGA Championship.  Kaufman finished tied for 10th at last week’s opening event, the Frys.com Open.  Kaufman earned his way onto the PGA Tour this season by finishing sixth on the money list in last season’s Web.com Tour.

For more information on Smylie Kaufman and the Journey to Better, visit: http://srixon.com/thejourney/

For additional information on Srixon, Cleveland Golf, and XXIO, products or staff players, visit: www.srixon.com, www.clevelandgolf.com and www.xxiousa.com.
Posted by Blogger at 10:19 AM