(West Baden Springs, Ind.) – The last time the Chicago Cubs won the World Series in 1908, they held their spring training on the grounds of French Lick Resort, then again in 1945 when they last made the fall classic. 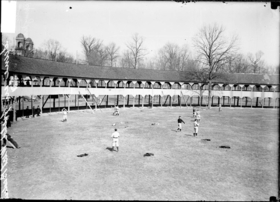 In honor of the Cubs outstanding play this post season and to support the historical connection, French Lick Resort has placed W pennants on flagpoles throughout the property. The W symbolizes a 2015 post-season win for the Chicago Cubs and the flag is here at the resort because West Baden Springs Hotel has a deep history with The Cubs.

The Cubs held their spring training on the western portion of the grounds at the West Baden Springs Hotel in 1907 and 1908, and subsequently went on to win the World Series both seasons.

The mineral springs are said to have been a part of the Cubs success. The legendary Frank Chance, of Tinker to Evers to Chance fame, was the player manager then, and believed in the curative effects of West Baden’s mineral-laden Sprudel water after a long winter’s lay off.

From 1906-1911 the Cubs stopped in West Baden for spring training. They returned to the area again until 1943 where they trained on the 18th Fairway of the Valley Links course at French Lick Springs Hotel, and then coincidently, made it back to the World Series in 1945.

French Lick Resort features two grand hotels nestled in the Hoosier National Forest of southern Indiana. French Lick Springs Hotel is listed on the National Register of Historic Places, while the West Baden Springs Hotel, a National Historic Landmark, consistently makes Condé Nast Traveler’s “Best Places to Stay in the World” and has been ranked the No. 1 Hotel in Indiana by US News & World Report in 2013 and 2014. Earlier this year, French Lick Resort was also named the Best Historic Hotel in the USA TODAY 10 Best Readers’ Choice Awards.