Poll Results: Not Everyone Agrees on Removing Their Caps to Shake Hands 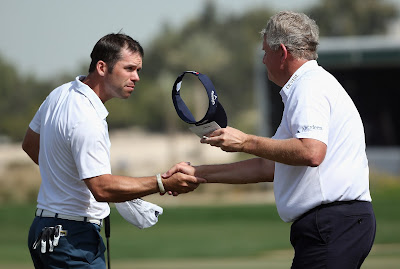 It’s a scene that plays out every week on the PGA TOUR ... The last player of the group holes out on the final hole and everyone - professionals and caddies - remove their hats/visors and shake hands.

I was curious. Is that just a Tour thing, or does everyone participate in this post-round ritual?

With that in mind, I turned to the Google+ Golf Community and asked, “Do you remove your hat when shaking hands on the 18th green?﻿”

Of those who responded, 73 percent said yes. That’s an impressive number, unless you grew up being taught that removing your hat was the “proper” thing to do. Imagine 27 percent of the population not saying “please” and “thank you” in day-to-day life.

That may be a bit extreme, considering not everyone had that bit of golf etiquette engrained in them at an early age. My grandfather was a golfer and taught me to respect the game and its traditions - currently popular or not.

So, am I upset with the 18 percent (9 percent said they don’t wear hats) who don’t remove their hat when shaking my hand? No. It’s their choice and it doesn’t offend me. I will, however, teach my kids this honored ritual if/when they start playing the game.

Both +Vipul Gidda and +Victor Calderon remove their hats. Calderon said, “Always, it's proper etiquette and good sportsmanship to show your fellow player.”

Not sure how they feel about those who don’t. I do know that +Ricky Potts doesn’t like it when others pooh-pooh this custom.

Only fair to give Rust equal time to respond: “Taking off your hat is not important. Be bugged then. I'm not a professional and neither are you. It's not disrespectful.”

I’d like to be nearby the next time Potts and Rust finish a round. I’m sure they’re buddies and will have a good laugh, but I’d still like to see the interaction.

We’ve heard from the guys, but do the same “rules” apply to ladies? I have to admit that I’ve not paid attention during LPGA events.

+Glo Bie, a woman who doesn’t wear a hat, joked “Hat-hair not good for us girls :-(﻿ But #TFT teaches male participants to remove their hat--so touched; about cried when one little guy removed his -#cap-- to shake my hand! [gush] :-)﻿ #sportsmanship #respect﻿”

Glo Bie said she’d check her Emily Post etiquette book, “they may have updated to include women :-)﻿” and shared a past experience. “As some sage Scotsman I had been paired with told me, ‘It's a man's sport, so you need to play by the man's rules.’ He ended up becoming a dear friend and golf mentor.﻿”

For those interested, it turns out Emily Post had updated the book and addresses caps for women. Thank you for the link, Glo Bie. http://emilypost.com/advice/hats-off-hat-etiquette-for-everyone/
Posted by Blogger at 11:49 AM