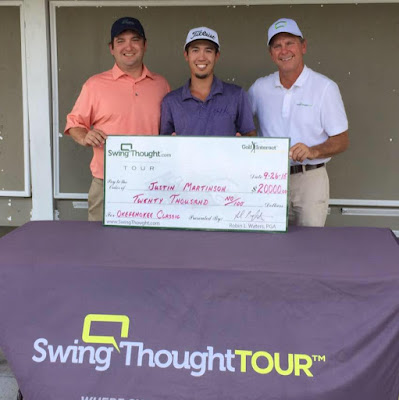 Rookie Anders Albertson out of Georgia Tech and Web.com Tour member Brian Richey out of Florida Southern tie for second

(Waycross, Ga.) – Former University of Delaware Star and Big Break The Palm Beaches, FL runner-up Justin Martinson didn’t post a score higher than 67 in four rounds at the Okefenokee Classic held at the Okefenokee Country Club in Blackshear, Ga. on his way to winning the final $140,000 purse event of the 2015 Swing Thought Tour Pro Series season. The win was his third on the Swing Thought Tour in the short time since turning professional in 2011. Rookie Anders Albertson, who turned professional earlier this season after a stellar college career at Georgia Tech, finished two shots back and tied for second with Web.com Tour member Brian Richey out of Lakeland, Fla.

Albertson, out of Alpharetta, Ga., turned professional in June, making his professional debut at the Swing Thought Tour New Bern Classic a week after helping his team to a victory in the Palmer Cup, an international event pitting the best collegiate players of the U.S.A. and Europe against each other in a Ryder Cup style format. Richey, who starred at Florida Southern before turning professional in 2010, competed on the Web.com Tour this season where he finished 88th on the money list, thus earning conditional status for the 2016 season. Richey finished 6th on the Swing Thought Tour money list in 2014 while grabbing his first career Pro Series win and one of the tour’s five Web.com Tour Q School Reimbursements. Both players shot final round low 9 under par 63’s to move up five places, from T7 to T2, earning $8,960 each and finishing just two shots behind Martinson.

Martinson, out of Avondale, Pa., posted two wins on the Swing Thought Tour Pro Series in 2014, earning the Swing Thought Tour’s Most Improved Player Award. Looking to continue his progression towards the PGA Tour, Martinson started his 2015 season by competing on the popular Big Break The Palm Beaches, FL where he garnered national recognition by finishing runner-up to fellow Swing Thought Tour member Richy Werenski. His stellar play continued as he finished 3rd in the Swing Thought Tour Pro Series Season opening Valdosta event. He would go on to make 7 of his next nine cuts leading up to Okefenokee, including a season best T2 finish in New Bern where he would defeat 2013 Player of the Year runner-up Justin Lower in a sudden death playoff to earn the Swing Thought Tour exemption into the Web.com Tour Utah Championship. Martinson closed the 2015 season right, earning $20,000 for the Okefenokee Classic win and catapulting himself into 8th place on the season ending money list. More importantly, the win could not have come at a better time as it is sure to provide him with great momentum heading into the fall Web.com Tour Q School where 50 exempt memberships onto the #2 tour will be awarded for the upcoming 2016 season.

Other news & notes from the 2015 Okefenokee Classic:
- 2011 Swing Thought Tour Player of the Year Jeff Corr, a member of the Web.com Tour this season, finished T4 after shooting a course record 61 to open the event.
- Eric Cole out of Tequesta, Fla. matched Albertson and Richey for the low round of the final day, 63, moving him from T17 to T4 with Corr and multi-time Swing Thought Tour winner Chip Deason.
- Big Break Myrtle Beach winner Jimmy Brandt finished in solo 12th after a final round 66
- After an opening round of par 72, the previous Pro Series event winner Grant Leaver shot the final three rounds in sixteen under par to finish T13.
- J.T. Griffin, who is guaranteed a Web.com Tour start at the Rex Hospital Open next season via his eGolf Pro-Am win, finished T13.
- Charleston, W.V. native Christian Brand made the biggest move of the final round, shooting 64 to move from T41 to T15.
- 2015 Savannah Lakes Village Classic Champion Chas Narramore finished T22, earning $1,810, and giving him the season ending Swing Thought Tour Money Title by just $300 over rookie Adam Svensson. Narramore carried dual membership this season on both the Swing Thought Tour Pro Series and Web.com Tour. He also got married the week after his McCormick victory so the former Middle Tennessee State star has had a lot to celebrate this season!

The Swing Thought Tour would like to thank Okefenokee Country Club General Manager Kas Asbury, Pro Shop Manager Mike Ranew, Head Superintendent Brandon Key, and the Membership, Volunteers, Housing, and entire Staff for conducting a special event to conclude our 2015 Pro Series season. The Swing Thought Tour would also like to thank our Host Hotel Sponsor, Baymont Inn & Suites, and Fitness Sponsor, Anytime Fitness, for being a part of such a great event. We look forward to a return trip for the 2016 Pro Series season!