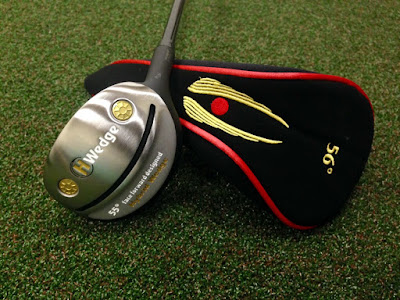 I don’t generally open a product review with a story, but this one is relevant, so bear with me.

We played a practice round for our sectional tournament while I was in high school. I must have been in 10 bunkers that round. I went home, read every tip I could about sand play, practiced that week and was ready for the tournament. As fate would have it, I didn’t find one trap, but have been good out of the sand ever since.

Why start with that story? Because I’m one of the lucky amateurs who doesn’t struggle from bunkers. The vast majority of us do, however. For those, you may want to give the H-Wedge from Black Magic a try.

I’m focusing on sand, but the H-Wedge can also be very useful out of heavy rough and even the opposite - tight lies.

While they make 50° and 60° versions, I tested the 55° H-Wedge, which can be opened to 60° - unlike past models from Black Magic (a common complaint addressed).

If you struggle out of the sand, you most likely attack the ball at too-steep of an angle or try to scoop the ball. Both are recipes for disaster. With the H-Wedge, all you do is take your normal swing. Not a normal bunker swing, of course, but normal swing ... period.

What surprised me the most was the spin I was able to put on the ball. My first attempt jumped out of the sand and I thought it would roll out 15-20 feet behind the hole. It didn’t. It checked up and stopped within the makable 4-foot range.

In the rough, many amateurs stab at the ball - thinking they need to go in aggressively to get the ball out. With the H-Wedge, though, you can swing as if you’re in the fairway. A gentle swing is all you need. Perhaps it’s the added mass behind the club?

When I played a lot of golf, I was solid with my long irons. Once I joined the once-a-week crew, I began to struggle and lose confidence. That’s when I turned to hybrid irons and they made a huge difference in my game. If you struggle around the greens - giving away valuable strokes - the H-Wedge from Black Magic can be a game changer.

Want to see for yourself? Put an H-Wedge in your bag. Not convinced once to try for yourself? The H-Wedge comes with a 30-day money back guarantee. You’ve got nothing to lose and a great deal to gain.

Learn more at www.blackmagicgolf.com.
Posted by Blogger at 12:57 PM