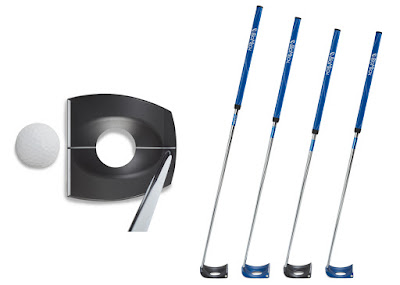 After the Rules of Golf change in January, the longer ACE will still conform — and still result in better, more accurate, and healthier putting

(Warwick, RI) - On January 1, 2016, most forms of anchoring a long putter will be illegal according to the Rules of Golf. But just because these methods of anchoring are illegal doesn’t mean golfers will have to use a shorter putter. BioMech’s AccuLock ACE putter—which is available in standard lengths from 39 to 47 inches —will still be allowed under the Rules of Golf.

Engineered by scientists to produce a more natural and consistent putting stance and stroke, the ACE features a long shaft (allowing golfers to stand up straighter), that is angled slightly forward to put the golfer in an anatomically optimal position.  Once in that position, the grip rests against the inside of the leading forearm, a position that remains legal under the new Rules.

But more than legal, the ACE putter is the simplest and most accurate putter on the market. Optimizing physiology and physics, it simplifies the putting motion by getting the golfer to stand taller; set up in a consistent, natural, and balanced athletic position; align properly to the target; and make the stroke with the larger, more accurate muscles of the body’s core. As a result, the ACE gives golfers better control of the stroke, rolls putts that stay on the target line, facilitates dramatically improved distance control, and reduces the back problems and pain often associated with traditional putting.

But it isn’t only golfers looking for an alternative to illegal long putting who will love the ACE. All golfers, no matter what method or model they currently use, will find the ACE a better, more accurate, and easier to use putter.

Unlike traditional putters and putting methods that focus solely on engineering and mechanics, the ACE was designed to optimize the putting motion based upon the body’s physiology and the physics. The AccuLock Core Putting System provides these advantages to all golfers:
* Standing taller and more open gives the golfer a better view of the target throughout the stroke.
* The forward angle of the shaft and innovative Optical Alignment System position the golfer’s body in the same position every time.
* The putter facilitates a “true pendulum” stroke, straight back and straight through, with the clubface remaining square to the target line
* The stroke is controlled by the golfer’s core; the hands, wrists, and forearms remain totally stable and quiet. The result is significantly improved distance control.
* The combination of stance and stroke significantly reduces the lower-back strain and off-balance movements associated with traditional arc putting
* Regular use of the ACE trains the body to make a better stroke, one without the hands, arms, and small muscles that can produce mis-hits, mistakes, and misses

Several PGA Tour players have put the ACE in play at PGA Tour events and its presence is increasing on other professional tours around the world.  Golf Magazine features the ACE in an article, “7 Ways to Raise Your Game,” in the November 2015 issue.

The BioMech AccuLock ACE putter is available directly from the manufacturer at biomechsports.com, as well as through select green-grass retailers. Retail price is $279.99.

Recently, a business associate shared with me an intriguing story about someone with back pain...

Michelle Onoff is a successful yoga instructor. Yet for some reason, she suffered with lower back pain.

As a chiropractor, and someone in the healthcare field, I was fascinated by this.

I don't know about you, but I was under the impression that yoga instructors, given their active, stretch-filled, muscle-focused, posture-perfect profession and lifestyle, would be the LAST PEOPLE ON EARTH to experience back pain.

Actually, I was kind of shocked.

If a health-minded yoga instructor can be dealt a crippling back pain blow, what does this say about the rest of us?

Here's Michelle story in her own words. I think it'll inspire hope if you're suffering...

"I was feeling very weak in my core area. And I was having some radiating pain in my lower back.

And I was going to the doctors, and they were telling me things like you need to have disc replacement.

You need to have all these surgeries...

You need to be on these pain medications;

And they wanted to put me through a lot of surgical procedures...

I didn’t want to do ANY of that. But the pain was so bad... I needed some relief.

So I went to two neurosurgeons and I went to a back pain specialist...

The surgeons wanted to operate on me in different places...

… and the back pain specialist wanted to do various procedures, including implanting something permanent in my spine.

I’ve had four procedures that involved needles in my spine, epidurals in my spine and that only gave me a little bit of temporary relief for a couple days.

But it did not cure or really help anything.

It just put a band-aid on a pain for couple of days and that was it.

After my first session of Back Pain Relief4Life, I felt an opening in my back that I haven’t felt in a long time.

I felt stronger to my core and I felt that that radiating burning heat pain that I was feeling, seem to dissipate a little bit.

It seemed to just open up my back in general.

And then after my second session today, I noticed EVEN MORE the stretch in my lower back and more strengthening in muscles that had been weak that I think might help support my lower back.

I was VERY SKEPTICAL about doing Back Pain Relief4Life. Because, as I am a yoga instructor, I feel very knowledgeable in anatomy. And how to help people that come to me in pain.

But I was not aware of certain muscles that I was not using in the body that might help my lower back."

Here's the back pain program she's referring to:

I share this with you today because if you suffer from back pain (like 3/4 of the population), I'm told this pain relief program WORKS WONDERS.

People, in as little as 16 minutes, have experienced nothing less than total relief. Do nothing more than a specific sequence of 8 simple, pain-relieving movements.

Sounds incredible, but yet Michelle is a prime example.

See for yourself. Especially if you're being told surgery, needles and medication are in your immediate future.

You've got nothing to lose.

PS: My personal takeaway? Michelle was humble to admit yoga wasn't working for her.

To me? That takes guts.

She was also smart enough to stay away from drugs and surgery when there were other more natural options.

But sometimes, one gets to the point where you'll try ANYTHING to get even a little bit of relief. If you're at that point, I encourage you to check out: