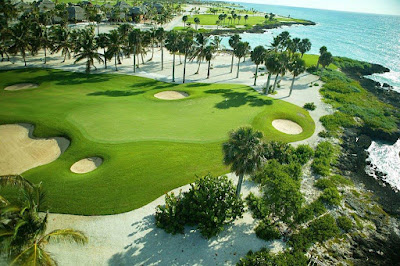 Punta Cana in the Dominican Republic and the Portuguese island of Madeira become the 25th and 26th destinations in a growing list of popular golf hotspots providing a service that has helped traveling golfers save approximately $4 million in airline excess charges over the past five years.

Sets of the latest TaylorMade and Callaway golf clubs will be available from $80 to golfers flying into Punta Cana, on the easternmost tip of the Dominican Republic, beginning November 1. Bookings can be made online starting October 15. After being pre-selected, the full set of clubs will be delivered to the customer’s hotel or resort on arrival and picked up before departure.

Punta Cana offers a variety of spectacular courses within a 30-mile radius of the airport, including the Tom Fazio-designed Corales Golf Club and the Jack Nicklaus-inspired Punta Espada - which both rank among the Caribbean’s top 10 courses.

“Adding Madeira to our list of locations is tremendous news for us,” Judge said. “Portugal is a very popular destination for European golfers and we’re delighted that we can offer them something a little different in Madeira, where the Seve Ballesteros-designed Porto Santo course is one of the top attractions.”

The unrivaled ClubstoHire.com service is available from one end of the Mediterranean to the other, with Madeira serving as the westernmost point through to Belek in Turkey to the east.

“Not only does the service offered by ClubstoHire.com save on potential airline excess luggage costs and the hassle of moving heavy golf travel bags to and from airport terminals, but it also provides golfers with the rare opportunity to try the very latest clubs from the leading brands,” Judge said.

The move into the Caribbean comes just three months after the successful opening of similar operations in the United States at the prime golf destinations of Orlando, Las Vegas and Phoenix/Scottsdale. These locations were added after last year’s move into Africa (Cape Town and Marrakesh) and Asia (Bangkok, Phuket and Pattaya, Thailand), as increasing numbers of golfers travel to long-haul destinations to play in warmer conditions.

ClubstoHire.com has received numerous accolades in Europe for its work. Last year, the inaugural “HSBC Golf Business Community Award for Innovation” award, voted on by golf industry professionals, was presented to Judge at a ceremony in Abu Dhabi. In September, ClubstoHire.com was touted as one of the top companies in Ireland as a part of the “National Champions” portion of the prestigious European Business Awards, with the European winners to be named in early 2016 from 678 companies in 33 countries across Europe.

See www.clubstohire.com for more information.
Posted by Blogger at 9:27 AM

thanks for posting this blog. its really very helpful for us.
Casa de Campo Packages