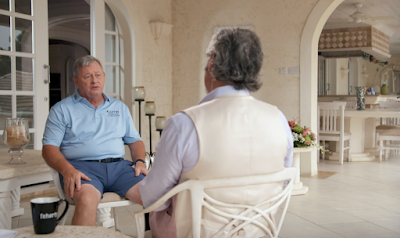 Monday’s world premiere episode will continue the resumption of the series’ 10th season, as the first of four new episodes airing Monday nights on GOLF Channel over the next four weeks. Each interview was filmed prior to production for the show being suspended due to COVID-19.

Filmed in Barbados, the Welshman discusses several topics with Feherty, including:
- Recalling his victory at the 1991 Masters, six days after becoming new World No. 1.
- Revisiting key moments from his eight consecutive Ryder Cup appearances.
- Being part of European golf’s “Famous 5,” as players all born within an 11 month span.
- Reflecting on traveling the European Tour in a camper van to begin his career.
- Serving as captain of the winning 2006 Ryder Cup team at The K Club in Ireland.
- His close call, near victory at The 2001 Open at Royal Lytham and St Annes.
- The circumstances around the disappearance of his ‘91 Masters trophy.

In your academic career, you may have to write several essays on similar topics. The important thing, in this case, is to make the essay stand out every time, even if it’s on the same topic as the previous one. Now, the obvious question is, how do you ensure the authenticity of the two essays on a similar topic? Well, our essay reworder tool can help you. The bibliography maker tool is simple to access and allows you to submit an impeccable essay no matter how similar to your essay topics are.

Get research paper writing help online UK
at studentsassignmethelp.co.uk. It has over 2000 expert writers who are the best in their field and have received a high number of positive feedback from UK students. If you employ a writer from SAH, you can contact them at any time via phone, email, or live chat. They are available 24 hours a day, 7 days a week to assist you. They often write assignment,thesis, dissertation, and essays in addition to research paper writing with 100% plagiarism free at a very low cost.

Do you want help with your Malaysia birth cert translation? don't worry in this regard just consult the Singapore translators team and get the hassle-free translation of Malaysia's birth certificate on the same day.

You can ask here for a help. They helped me a lot an I’m highly satisfied with quality of work done. I can promise you 100% un-plagiarized text and good experts there. Use with pleasure! DigitalEssay.net

My friend was worried about her due assignments when I suggested her assignment writers. And she is really happy with them.