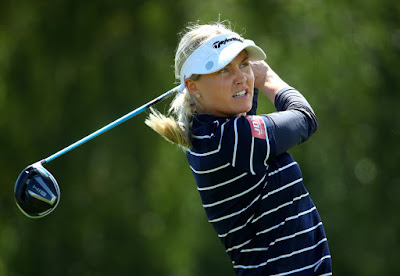 
(Carlsbad, Calif.) — One of the most consistent players on the Rose Ladies Series, Charley Hull tops the Order of Merit using a bag full of TaylorMade equipment and golf ball.

Three-Time Tour Winner and current World #25, Charley Hull who has won on the Ladies European Tour, the LPGA Tour and recently added a Rose Ladies Series title to her list of accomplishments, has now topped a star studded field at the Grand Final. After having to abandon the final day at Wentworth due to a wildfire, Charley's round of 65 at The Berkshire jumped her back to the top of the rankings to claim the overall title.

WHAT YOU NEED TO KNOW
- Charley won once in the Rose Ladies Series and finished in the Top 10 in 7 out of the 8 tournaments
- Charley’s won on her very first week out at Brokenhurst Manor gaming TaylorMade’s new SIM Driver which is equipped with an Attas Rockstar 6X shaft
- After switching into TP5 prior to the Rose Ladies Series Charley has a scoring average of 71 (T2) and a total of 44 birdies or better (2nd) across the series.
- TP5 over TP5x due to the little extra spin it offered. Combining SIM driver with TP5 Golf Ball, Charley gained 1mph club head speed and 2-3mph ball speed. This resulted in about half a club gain through the bag, alongside a tighter dispersion
- Charley plays the new SIM Max fairway at 15 degrees and SIM Max Rescue at 19 degrees, both of which have V Steel™ technology incorporate into the sole to improve turf interaction and playability from various lies
- Charley recently switched into some new TaylorMade forged irons for the first time. More information to follow on these
- Finishing up the bag with RAW Face Milled Grind 2 Wedges in 50, 54 and 60 degrees
- This is the first ever Rose Ladies Series. Consisting of 8 events over 10 courses, of which Charley competed in each every event