Cowboys’ Elliott Looks to Score with OnCore in the Golf Business

(BUFFALO, N.Y.) — OnCore Golf, the Buffalo, New York-based golf ball company, announced that Ezekiel Elliott (“Zeke”) has become the latest shareholder in the growing organization. OnCore continues to have a significant impact on the game with new product and technology launches including the new VERO X1 tour ball and the Golf Boost AI instructional app and has caught the attention of a number of athlete and celebrity golfers over the past several months. 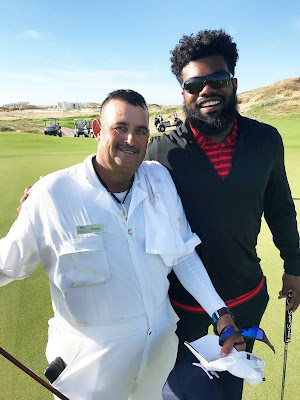 “We are committed and strive to create best in class products and experiences for golfers of all levels. We continue to be innovative, seen by many as change agents that are bringing new ideas and approaches to the industry,” commented Keith Blakely, OnCore’s Chairman and CEO. “While Zeke may be new to the world of golf his competitive spirit drives him to become the best in whatever activity he undertakes. We expect the game of golf will be no different for him.”

“Initially, it was OnCore’s full suite of award-winning golf balls, combined with using OnCore’s Golf Boost AI swing analysis and instructional app that attracted Zeke to OnCore but ultimately, it was the company’s leadership and long term plan that solidified his involvement,” offered Rocky Arceneaux, President of Alliance Management Group.

Elliott played college football at Ohio State, where he earned second-team All-America honors in 2015. He was drafted by the Dallas Cowboys fourth overall in the 2016 NFL Draft. A three-time Pro Bowl selection, Elliott led the league in rushing yards in 2016 and 2018.

“I’ve been involved in team sports my entire life and have always been surrounded by players, coaches, and staff members that were instrumental in helping me achieve success. And while golf may not be a team sport, based on my interactions with OnCore Golf’s “team” it was an easy decision for me to join forces with this ground-breaking organization,” offered Elliott.

“We have been delighted to have a number of high-profile personalities become avid OnCore supporters over the years,” commented Steve Coulton, co-founder and VP Sales at OnCore Golf. “We maintain a commitment to helping grow the game by supporting greater awareness, inclusion, accessibility, and diversity. OnCore has already begun making plans to partner with Zeke to support local initiatives in the Dallas community and looks to “play it forward” in the coming days.”

For more information about OnCore Golf and its other product and technology innovations, visit www.oncoregolf.com.
Posted by Blogger at 7:30 AM