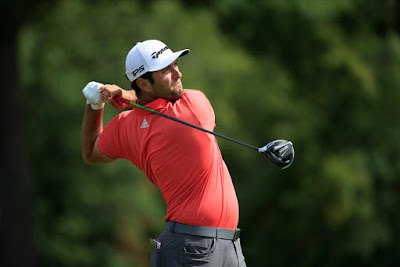 Jon's playoff winning putt on 18 with his Spider X chalk was 66ft - his longest on the PGA TOUR this season. The other thirteen clubs in his bag are his SIM driver, SIM fairways, P750 irons and MG2 wedges.

Recently and just prior to his win at Memorial last month, Jon weakened the lofts on his P750 irons to adjust for a slight reduction in iron spin rates from his swing following the break in the PGA TOUR season.

- Rahm made 297ft in putts with his Spider X chalk over the four rounds and gained +0.970 in SG: putting
- Rahm was ranked 6th in Driving distance (331.2 yards)
- This is Rahm's 5th PGA TOUR victory since turning professional in June 2016
- Rahm led the field in Strokes Gained Tee-to-Green, Approach the Green and Proximity to the Hole
- Jon switched into TP5 from the TP5X earlier this year for more spin and control with his irons and wedges
- Rahm weakened the lofts in his irons slightly as he was hitting them further since the break and wanted to better manage his trajectory and descent angle
- Rahm's opening 36 holes (146) was the highest 36 hole score by a winner on the PGA TOUR since the 1999 Open Championship
- It was the first time the world no.1 and no.2 have met in a playoff since 1995 World Series of Golf
- Rahm bettered his opening 36 holes (146) by 16 shots shooting 130 on the weekend. This is the largest weekend improvement by a PGA Tour winner since fellow Team TaylorMade athlete Rory McIlroy shot 126 over the weekend at Quail Hollow in 2010 (17 strokes; 145-128)