(Carlsbad, Calif.) –TaylorMade Golf Company, makers of the No. 1 driver in golf, announced the launch of their standalone analytics platform, myRoundPro, designed to enhance the golfer’s performance and overall experience through the use of statistics and analytics such as Strokes Gained, which has quickly become one of the sport’s most valuable statistical barometers. 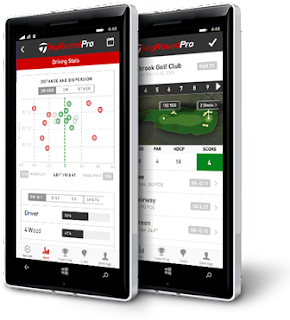 This launch follows the company’s prior collaboration announcement with technology industry leader, Microsoft, in conjunction with the brand’s Band wearable device and Health application. Already, the industry-first partnership has provided golfers of all skill levels with extraordinary shot tracking and analysis capabilities. This collaboration is further enhanced today with TaylorMade’s official launch of myRoundPro.

“Golf is a decidedly technical game and every little advantage helps,” said John Gonsalves, TaylorMade’s Vice President of Direct to Consumer & Digital. “We are extremely proud to offer players of all abilities an in-depth analytics platform in myRoundPro. At TaylorMade, innovation is the genesis of everything we do, which goes beyond our equipment. myRoundPro is truly an extension of our desire to enhance the game of golf in every way.”

Once players’ rounds of golf are complete using the Microsoft Band and Microsoft Health app, they can sync their round with their myRoundPro account to view classical statistics such as fairways hit, greens in regulation, sand saves and putts per round. Even further detailed analytics come in the form of dispersion charts, shot records viewed on individual maps of every hole played, Strokes Gained in driving, approach shots, putting and more.

myRoundPro uses the statistical analysis measurement commonly known as “Strokes Gained,” which was developed by Columbia Business School professor and author, Mark Broadie. TaylorMade’s platform enables golfers to monitor and track their performance and statistics against a professional tour player or scratch golfer benchmark. Strokes Gained also allows the golfer to identify specific areas of their game that are affecting their performance.

Strokes Gained is a new metric that has taken the golf’s top professional tour by storm. Utilizing data from millions of shots during professional golf rounds and thousands of amateur rounds, Broadie has created a baseline to enable golfers to assess how they perform in all aspects of their game (from 1ft to 600 yards) in comparison to other golfers. Strokes Gained enables the golfer to identify what specific areas of their game are affecting their performance. Strokes Gained calculations take into account the average number of shots for a professional or amateur golfer to get down from a given starting distance and starting lie condition and the average number of shots to get down from a given end distance and end lie condition.

myRoundPro is optimized for desktop, laptop and tablet computers and for use on mobile devices. Golfers are encouraged to create an account at www.myroundpro.com.
Posted by Blogger at 4:49 PM