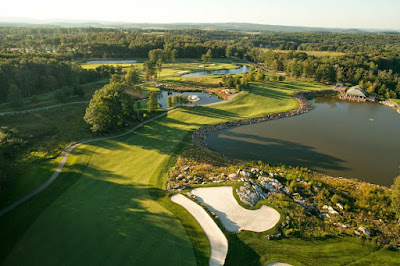 (RELEASE) - Rolling forested hills, rich farmland and sparkling rivers make southwestern Pennsylvania a visual treat – and it’s a place where you’ll find some of the best golf in the United States of America. Did you know that Pennsylvania has more golf courses per capita than any other American state – more than 700, of which about 500 are open to the public. And, 128 in the Pittsburgh area alone.

Many of the best are located in the Pittsburgh area. With eight courses rated an “outstanding” four out of five stars in Golf Digest’s “Best Places to Play,” plus the superior 4-1/2 star layouts at Olde Stonewall Golf Club and Nemacolin Woodlands Resort’s Mystic Rock, you’ll enjoy championship play that is second to none.

And, the eyes of the golf world will focus on the U.S. Open at Oakmont Country Club in 2016. Introduced in 1903 by designer Henry Fownes, Oakmont has hosted more combined USGA and PGA championships than any other course in the United States, including eight United States Opens, five U.S. Amateurs, three PGA Championships and two U.S. Women’s Open.  Golf Digest ranks Oakmont #4 in its most recent version of America’s Top 100 courses.

Perhaps the best thing about a golf vacation in the Pittsburgh area is the laid-back pace of play and the friendly welcome you can expect. The region features an amazing variety of accommodations – from world-class downtown hotels on the riverfront to full-service vacation resorts and cozy bed-and-breakfast inns scattered throughout the countryside. Many offer stay-and-play package deals that are an exceptional value.

For more information about golf in Pittsburgh, go to visitpittsburgh.com.
Posted by Blogger at 11:01 AM