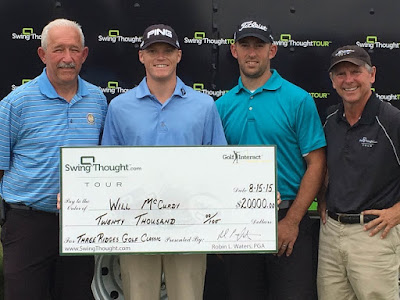 (Knoxville, Tenn.) – Auburn alum and resident Will McCurdy has been as hot as any player in the game of professional golf as of late. Not only did McCurdy withstand the blistering heat of July, he embraced it by leading the Swing Thought Tour’s Money List on the East side of the tour’s East-West Challenge with a win and runner-up finish in the three tournament series. Not only did he post a win in the series but he did so by 6 shots over his nearest competitor after firing a 2nd round 59 on the Mountain View course at Web.com Tour 1st Stage Q School host Callaway Gardens, a feat that garnered him national recognition. The East-West Challenge Money Title earned him a free spot in this year’s Three Ridges Golf Course Classic and he didn’t disappoint, continuing his hot streak by shooting four sub-70 rounds on his way to his third career Swing Thought Tour win.

McCurdy’s week didn’t start so hot as he made the drive to Knoxville after failing to qualify for the Web.com Tour Price Cutter Charity Championship. After arriving to the Three Ridges Golf Course late, and without his clubs, McCurdy managed to get some semblance of a practice round in after borrowing a set from friend and fellow competitor J.C. Horne, leading Horne to state later Saturday after the win that “he hit them a lot better than I ever did.” McCurdy finished at 16 under par for the event and led from start to finish.

McCurdy’s win didn’t come without its challenges. After three rounds McCurdy was the lone player sitting under 200 total strokes at 199 and headed into the final round with a two stroke lead over former Clemson standout and US Am Publinks Champion Corbin Mills. Paired with McCurdy and Mills for the final round was former LSU star and 2013 Three Ridges Champion Ken Looper. However, the biggest challenge to McCurdy’s title reign would come from local product and UT Chattanooga alum Jonathan Hodge playing in the next to last group just in front of McCurdy. McCurdy had to watch Hodge birdie 11 in front of him to get to 13 under and then he himself made bogey to fall to -15. McCurdy birdied 15 to get back to -16 but Hodge would birdie 17 and 18 to shoot a final round 66 and get in the clubhouse at 15 under, putting the pressure on McCurdy.

“I didn’t realize how low Jonathan had gotten until I saw the leader board on 13 and it was then that I knew it was going to be a fight all the way til the end,” explained McCurdy, “I saw the leader board walking up to 18 green, saw Hodge had finished at -15, and knew I needed par for the win.”

McCurdy’s approach shot on 18 went long, leaving him on the back fringe and about 40 feet away from the pin for birdie. His pitch shot came up about 3 feet short, leaving him more than a tester for par and the potential win. After his competitors Mills and Looper holed out, McCurdy stood over his ball and, with the confidence likened to that of a seasoned PGA Tour veteran, drained his par putt for the win and received the congratulatory hugs and handshakes from his family, friends, and fellow competitors. McCurdy received $20,000 for the win while Hodge received $9,960 for finishing 2nd.

Mississippi State alum Chad Ramey and Nova Southeastern alum Greg O’Mahony each shot 65 in the final round to jump from T10 and T13 to solo 3rd and 4th in two of the biggest moves of the day. Ramey earned $7,960 for 3rd while O’Mahony earned $6,760 for 4th. 1st Round co-leader and former Maryland star Matt Schall finished at 7 under par and tied for 17th. Georgia Southern alum Scott Wolfes, who was a shot off the lead after round 1, had the low round 63 of the final round moving him to T9. Mills and Looper each shot 4 over in the final round dropping them to T13 and T17 respectively. Michigan State alum and former US Am Publinks Champion Jack Newman started the final round tied for 4th and four shots out of the lead.  After shooting a final round 69, New man finished 5th, earning $5,760.

The Swing Thought Tour would like to think Three Ridges Golf Course General Manager Mark Brown, Head Superintendent Curtis Pique, and the entire staff and volunteers at Three Ridges for hosting such an outstanding week of events.

Next up for the Swing Thought Tour is the Kandy Waters Memorial Classic at the River Club in North Augusta, S.C. August 19 – 22 and the Woodcreek Classic at the Members Club at Woodcreek in Elgin, S.C. August 26 – 29. Competitors may sign up for either event by contacting the Swing Thought Tour offices at 800-992-8748 or going online to register at http://www.swingthought.com/shop/.