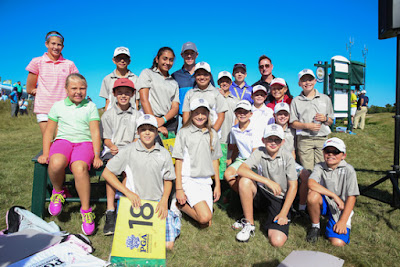 McIlroy talked with the teams and posed for photos during the Long Drive Competition held at the second tee at Whistling Straits.

PGA Junior League Golf is a fun, social and inclusive opportunity for boys and girls ages 13 and under to learn and enjoy the game of golf. Kids play on teams and wear numbered jerseys, learning the game with professional instruction and direction from LPGA/PGA Professionals.

“We’re thrilled to provide our local PGA Junior League Golf teams with this unique experience at the PGA Championship,” said Scott Kmiec, Senior Director, PGA REACH, PGA of America. “PGA Junior League Golf is creating the next generation of golfers. Having role models like Rory and Michelle endorse and believe in the program is tremendous.”

PGA Junior League Golf is one of the PGA of America’s fastest growing programs, with teams in all 41 PGA Sections and 48 states. This year, 30,000 boys and girls are participating on 2,500 teams nationwide, representing a nearly 100 percent increase in participation each year.

Kids play regular season matches, then assemble 10-player all-star teams comprising of a combination of players in the league. All-star teams compete in sub-regionals for a chance to earn a spot at one of eight regionals across the country this September and October.

The PGA Junior League Golf Championship will be held in November, with specific location and dates currently being finalized. Team California captured the Championship in 2014.