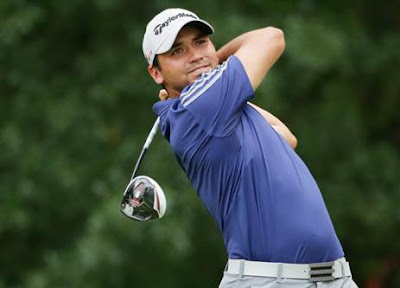 What You Need To Know:
· Day’s win is the 18th for TaylorMade drivers in the full calendar ’14-15 PGA TOUR season. Jason plays the 10.5* R15 460 driver (set to lower) with a Mitsubishi Rayon Kuro Kage Silver TiNi 70x shaft tipped 1’’. He has his weights centered for maximum distance, and averaged over 325 yards off the tee during the tournament.
· With 45 drivers in play (37.5% of the field), TaylorMade was the #1 driver brand at The Barclays.
· Day’s victory is the sixth for TaylorMade’s Tour Preferred EF wedge. This week, he switched to a 47*, 52* & 58* combination in the Tour Grind after previously playing a 47*, 52* & 60* combination. He put the 58* in the bag for more bounce this week.
· Day plays the RSi TP irons, which he currently has shafted with True Temper’s Dynamic Gold X7 shafts. Also of note, he carries a 47* RSi TP PW, which is de-lofted 2.5-3 degrees; Day has all of his irons bent strong.
· Day plays the Tour Preferred X golf ball with the number 87 (the year he was born) and a kangaroo stamp paying homage to his Australian roots.
· With the win, Day becomes the first player since 2000 to win his next start after winning his first major championship. The last was fellow TaylorMade tour staffer Martin Kaymer, who accomplished the feat in 2010.

As a child I still remember learning the difference between the words “may” and “can.” Generaly may is getting permission or being allowed to, while can means having the possibility https://krcasinomaxi.com/%EB%B8%94%EB%9E%99%EC%9E%AD/. In this case the question “can one win at a casino” begs the answer “YES.” Yes, you can win. Just as you “Can” win the mega millions lottery. Possible, but not probable.