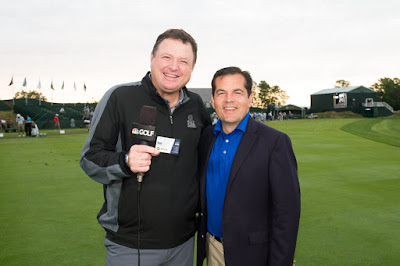 (KOHLER, Wis.) – After earning election into the PGA of America just 10 days ago, Golf Channel analyst Charlie Rymer was honored this morning, as he formally received his PGA membership card from PGA President Derek Sprague live on the air at the PGA Championship at Whistling Straits during Morning Drive. They were joined for the ceremony by Golf Channel co-host Damon Hack.

“The PGA of America is delighted to welcome Charlie Rymer to our family of PGA members,” said Sprague. “It’s an honor to wear the PGA badge, as it takes a significant commitment to the game of golf and our profession to earn membership. Charlie is a tremendous ambassador for the game, the industry and the PGA of America.”

After competing in both the 1988 Open Championship at Royal Lytham & St. Annes Golf Club and the 1992 U.S. Open at Pebble Beach Golf Links, Rymer earned a third-place finish during his rookie season on the PGA Tour at the 1995 Shell Houston Open. Meanwhile, on the Nike Tour, he won the 1994 Nike South Carolina Classic and was runner-up at the Nike Central Georgia Open a week later. After finishing his competitive playing days in 1998, Rymer became a commentator for ESPN, before moving to Golf Channel in 2009 as an analyst.  He currently serves as analyst and co-host for Morning Drive, Golf Channel’s daily news and lifestyle morning show.

The 1985 U.S. Junior Amateur Champion — an event that has also been won by Tiger Woods, Jordan Spieth and Johnny Miller — Rymer attended Georgia Tech on the Robert Tyre Jones Scholarship, awarded in honor of the world’s most famous amateur golfer. A winner of five collegiate tournaments, Rymer was named on two GCAA All-American lists (3rd Team – 1988/Honorable Mention – 1989), and was an All-ACC selection in both years. He was inducted into Georgia Tech’s Athletics Department Hall of Fame in 2000, and will be inducted into the South Carolina Golf Association Hall of Fame in January, 2016.

“Golf has been very good to me,” said Rymer. “I learned this great game from PGA Professionals. They have had a profound impact on my life … But I learned so much more than that. I learned how to dress and act and speak. I learned how to conduct a golf clinic and how to make people laugh. I learned how to make people comfortable in tense situations. I learned how to win and more importantly how to lose. I learned about respect, integrity, honesty and work … I can’t really do anything to pay them back. But I can support them by becoming a member of their organization. Hopefully, that will put me in a position to ‘pay forward’ at least a small portion of what they taught me.”
Posted by Blogger at 1:34 PM