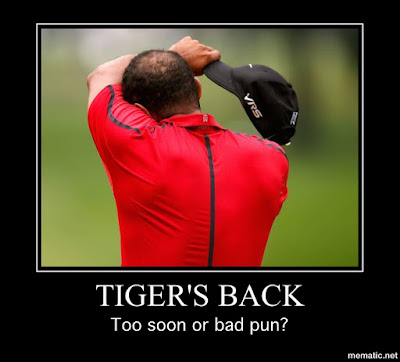 My most recent poll on Google+ had to do with Tiger Woods’ chances of making the FedEx Cup playoffs. He needed a win or solo second at the Wyndham Championships to do so.

The triple bogie on 11 was the turning point, but Tiger really put himself in a bad spot before that - missing putt after putt. Maybe we can go back as far as the 3-putt on the 54th hole?

However you look at it, Tiger’s 2014-15 season is over and the playoffs are in good hands with players like Jordan Spieth, Rory McElroy and Rickie Fowler. Tiger is scheduled to play again at the Frys.com Open Oct. 15-18, kicking off the 2015-16 season.

To the poll, which is my first with a right/wrong answer. Others have been more opinion based or asking preferences. Would Tiger Woods make the playoffs: Yes, No, I don’t care?

This is admittedly VERY unscientific, considering I did not close the poll prior to play. Tiger starting 64-65 undoubtedly added to people answering “yes.” In the end, 35 percent had faith in Tiger, while 49 percent did not.

Sixteen percent didn’t care. Really? Tiger is the most polarizing player in the game. Few people don’t care one way or the other. I’m guessing many of the people who answered “I don’t care” are really more fed up with news on Tiger, who still dominates the headlines when not playing well.

I was in the “No” camp, but was hoping he would. Head said no, while the heart was hoping yes.

Like many of you, I will be looking forward to some great golf over the next couple months, while anxiously awaiting the Frys.com Open in October.
Posted by Blogger at 10:17 AM