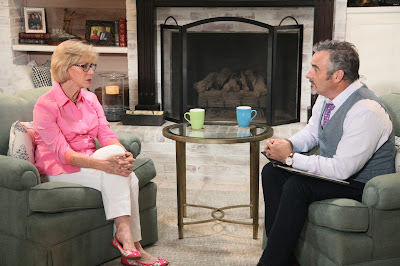 Rankin Opens Up to Longtime Friend David Feherty With Stories Away From the Golf Course, Including Her Family’s Battles with Cancer and the Emotional Loss of Her Husband, Yippy

(ORLANDO, Fla.) – One of the most respected voices in professional golf, World Golf Hall of Fame Member Judy Rankin welcomes David Feherty into her home in Midland, Texas, for a wide-ranging interview on a new episode of Feherty, airing Monday at 9 p.m. ET on Golf Channel.

Rankin – who recorded 26 victories in her LPGA Tour career and captained the 1996 and 1998 victorious U.S. Solheim Cup Teams – discusses with Feherty the beginnings of her playing career, including gracing the cover of Sports Illustrated at age 16, along with memorable moments in a career that led to her Hall of Fame induction in 2000. Rankin also recounts memories as a two-time Solheim Cup captain and why they are the greatest experiences in her golf career.

Rankin also opens up about her 45 years of marriage to Walter ‘Yippy' Rankin – who was Judy’s biggest cheerleader for both her golf and television careers – and her emotional loss when he passed away in 2012 after a long battle with cancer. She also shares her own battle in overcoming breast cancer in 2006, and the overwhelming support she received over the years from the golf and television community.

Retiring from professional golf at age 38 due to chronic back injuries, Rankin gives insight into her transition from professional golf to television, joining ABC’s golf broadcast team in 1984. She also reveals some of her best memories of walking inside the ropes with the game’s players, including Tiger Woods and Jack Nicklaus.

Select Rankin Quotes from the Interview:

On her husband, Yippy Rankin:
“In the quiet moments, one of the dearest things he ever said to me was, ‘I get more of a thrill out of watching you play golf and win than I ever did with anything I did myself.’”

On Captaining Two Solheim Cup Teams:
“I loved it. Yippy was a great help to me. It was a lot of work but it was great work. Every single person becomes so dear to you. For a few weeks in your life, it is such a big part of your life.”

“I haven’t gotten over to this day how we were treated at Muirfield Village and everything that Jack and Barbara Nicklaus and Muirfield Village made happen for us. It was spectacular. It was just the greatest experience.”

On Tiger Woods:
“I went through a pretty big illness and when I was able to come back after my bout of breast cancer, both he and Darren Clarke at the American Express tournament outside of London made their way 300 yards across the fairway and I got the two biggest hugs. That meant a lot to me.”

Emmy-nominated David Feherty, described as “a cross between Oprah Winfrey and Johnny Carson” by The New York Times as host of Golf Channel’s hit original series, Feherty, conducts interviews both heartfelt and irreverent – a trademark of one of television’s most irrepressible personalities. Earning critical acclaim for his refreshing interviewing style, the self-deprecating Feherty employs his laid back approach when sitting down with the most recognized names in entertainment, politics and sports to bring out laughs and an often seldom seen emotional side from his guests. He also makes a habit of engaging in his guests’ favorite places and activities to help capture the location of each episode.

As a long time golf fan, I seriously consider Judy Rankin among the top 4 Golf Broadcasters I've ever heard. She's very " easy " to listen to, has a great sense of humor, and her commentary is extremely insightful and informative. She exudes nothing but Class.