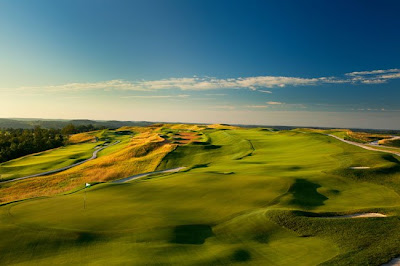 (French Lick, IN) - French Lick Resort, the award winning golf destination in Southern Indiana, has been selected among three finalists for the National Golf Course Owners Association "Course of the Year." The new Pete Dye Course at French Lick Resort will be representing the Indiana Chapter as its first course to be selected as a finalist.

The Pete Dye course, which opened in 2009, burst on to the national scene by receiving America's best new course accolades by the two leading golf publications in the country, Golf Digest and GOLF Magazine.

The course was also a major factor in the $500 million dollar restoration and casino development project lead by its founder and chief visionary, Bill Cook, whose corporate philanthropy changed lives and communities around the world including the small town of French Lick, Indiana. The development of the Pete Dye course and the reclamation of French Lick Resort continue to have an enormous economic impact on the small town of French Lick. Cook's generosity and vision still provides jobs for nearly 1,700 of the counties 3,000 residents.

The Pete Dye course was carefully carved into a dramatic site upon a hilltop - one of the highest points in the state - offering panoramic views in all directions that stretch for 30-40 miles. The course features a variety of elevation changes, rugged and dramatic terrain, narrow fairways, and challenging bunkers, along with spectacular views from every hole.