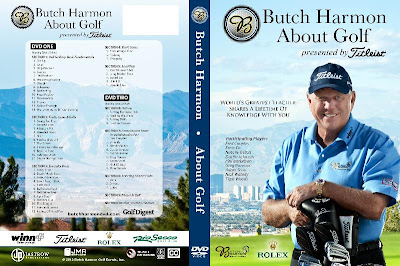 The response to the introduction of "Butch Harmon About Golf presented by Titleist" DVD at the PGA Show was so overwhelming that the production schedule was accelerated to make the DVD available to ship on March 1.

The DVD is directed by seven-time EMMY award-winner Terry Jastrow. "Butch Harmon is arguably the greatest golf teacher of all-time.  Every golfer in the world today can benefit from the lessons Butch teaches in this comprehensive DVD, which will set a new gold standard for golf instructionals," said Jastrow.

Due to overwhelming demand, "Butch Harmon About Golf presented by Titleist" will begin shipping on March 1 on www.butchharmondvd.com.

"Over the past 40+ years I have been blessed to work with some of the greatest players in the game: Phil, Ernie, Greg, Tiger, Seve, Freddie, and several up and coming players, such as Adam, Nick, and Dustin, who are destined to carve their names in the golf record books," says Harmon. "Obviously I am proud to have been associated with them and to have contributed in some small way to their success. But their accomplishments are only part of the overall picture of the scores of everyday players, from all walks of life who have left the practice tee after working with me, that feel that their game has been improved. For everyone that has worked with me there are thousands of golfers that I will never have a chance to try and help.

"With that thought in mind, I decided to commence work on the filming of a DVD that would share a lifetime of golf knowledge with the public that would cover: the fundamentals, identifying faults and the fixes, specialty shots, short game, sand play, putting, club selection, kids, under and over 13, women, seniors and physical fitness (by the way, I do practice what I preach as I have recently lost 35 lbs.).

The DVD was filmed with the concept of paying attention to detail, thus it is a 2-disc set, 4 hours in length and laced with interviews with some of the greatest golfers of all time.

"My thoughts were to create a DVD that was designed to help your game, capture and retain your interest, and to entertain you. Unlike any other golf instructional DVD ever produced, I'll share my thoughts supplemented with those of the game's greatest golfers that I've had the privilege of working with."

Those players who have worked with Harmon all agree that the keys to his success are his keen eye for the strengths and weaknesses of each individual player's swing; his comprehensive understanding of the game; his ability to communicate with the golfer; his toughness; his enthusiasm for his players to succeed; and his relationship and rapport with his players, making their work about teamwork rather than individual accomplishment.

The "Butch Harmon About Golf presented by Titleist" DVD set is sponsored by Titleist, Winn Grips, Rolex, Golf Digest and JMA and will be available for $79.95 on-line at www.butchharmondvd.com.