Wearing adidas Golf’s new FASHION PERFORMANCE apparel and footwear, Korda Outlasts 6-Way Playoff to Capture Her first Career LPGA Tour Title
(CARLSBAD, Calif.) – Playing aggressive and confident all week, adidas Golf Tour Staff professional Jessica Korda battled back on the final day of the Women’s Australian Open in Melbourne to take the last spot in a six-person playoff and ultimately capture her first LPGA Tour victory. Korda closed with a 1-over 74 to finish at 3-under, but it was her 25-foot birdie putt on the second sudden-death playoff hole that sealed the win. 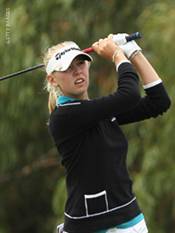 At 18-years-old, Korda became the sixth youngest winner in LPGA Tour history and the fourth youngest to join the winner’s circle in a 72-hole event. She is expected to make a major jump in the Rolex Rankings and go from No. 285 in the world to No. 30.

Notable:
* Korda wins her first career LPGA Tour title in adidas Golf FASHION PERFORMANCE apparel
* Win has earned Korda spot in season-ending CME Group Titleholders event
* Korda has played in 16 LPGA Tour events
* Korda is only the fifth player to win an LPGA event at age 18 or younger
* Korda qualified for the LPGA Tour by finishing runner-up at the LPGA Qualifying Tournament back in December 2010.
www.adidasgolf.com