'Bubba & Friends Drive to a Million' officially kicks off with $10,000 PING donation 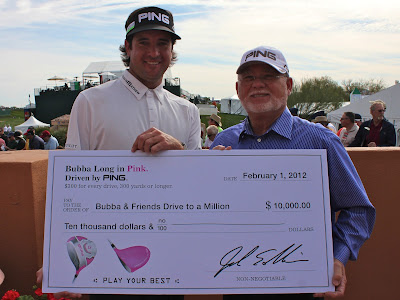 (PHOENIX) – The Waste Management Phoenix Open hadn’t yet begun when the first oversized check was presented to a player. To mark the official start of his “Bubba & Friends Drive to a Million” charity initiative this season, PING Pro Bubba Watson received a $10,000 upfront donation from John A. Solheim, PING Chairman & CEO.

Watson will be playing an all-pink PING G20 driver as part of his goal to raise $1 million for charities this PGA Tour season. In addition to its $10,000 contribution, PING is supporting “Bubba & Friends Drive to a Million” by donating $300 for every drive he hits 300 yards or more (up to 300 drives) in 2012. PING’s fundraising event is called, “Bubba Long in Pink. Driven by PING.” All funds raised will go to Phoenix-area charities, chosen by PING with Bubba’s support.

The “Bubba & Friends” long-drive tally officially began at last week’s Farmers Insurance Open, where Watson totaled 26 drives of 300 yards or longer, for a PING contribution of $7,800. He led the field in average driving distance at 320.8 yards.

“By virtue of his accomplishments on tour, Bubba has put himself in a position to help people, and we applaud him for this effort,” Solheim said. “What better way to draw attention to charitable causes than with this pink G20 driver that’s like nothing else on tour. He certainly hits the ball like no one else on tour.”