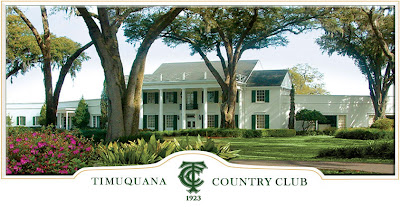 (Jacksonville, Florida) - Timuquana Country Club in Jacksonville, Fla., announced the inaugural playing of a major amateur event, The Timuquana Cup. The event will elevate the purest form of amateur golf; an invitational format that will consist of 40 of the top Mid Amateur players in the country, together with 20 of the top Senior Amateurs as well. The competition will be a 54 hole stroke play event played Oct. 19-21,

This Donald Ross classic was designed in 1923, and has been carefully preserved since its inception to insure the integrity of the architect's original plans. Like the finest of Ross's designs, the challenge lies not in its length, but in its brilliant subtleties and understated shot values.

In 2002, Timuquana Country Club was the host club to the USGA Senior Amateur Championship, and the Club and its members drew rave reviews from both the competitors and the officials from the USGA. During the summer of 2011, Timuquana regrassed the entire course, and at the same time, performed major renovation work on its Clubhouse; both accomplished with great success.

The theme of the event will be a "Gathering of Friends" with a small, select field dedicated to those individuals whose passion is amateur golf. The Timuquana Cup will be a celebration of amateur golf.

"We wanted to share a very special Donald Ross course with amateur golfers from across the country who would enjoy competing in small, select field of players", said Steve Melnyk, Timuquana Country Club member.

It is anticipated that there will be a local qualifying for Jacksonville area golfers for a limited number of spots in the event.

The tournament chairman is Steve Melnyk, and USGA Rules Official Tom Dudley will be in charge of course set up and the rules of competition.   One of the highlights of this year's event will be a cocktail cruise on the St. Johns River departing from the Timuquana Country Club dock and housing will be available for many competitors in members' homes.