Breezing Along the Outer Banks 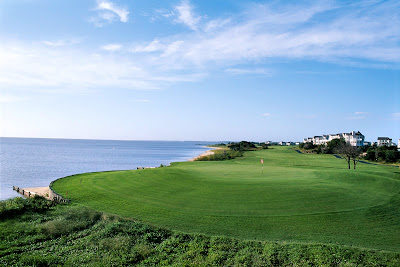 North Carolina's most famed beaches now earning recognition for a wide variety of quality golf experiences
(OUTER BANKS, N.C.) — From the time Orville and Wilbur Wright first took flight in the updrafts of Kitty Hawk, The Outer Banks of North Carolina have gained renown for far more than relaxing, wide sandy beaches, mild year-round temperatures and historical attractions. Indeed, the Outer Banks have become legendary for offering an understated quality of life that stands as tribute to generations of people who have thoughtfully preserved the seaside paradise, not allowing the Outer Banks to get too overbuilt or commercialized like many resort locations located farther north and south along America’s Eastern Seaboard.

Loyal visitors return year after year to spend time with family and friends. They know of the sand and saltwater activities, delicious food, quaint shopping, sightseeing, wild horses and history lessons that can be found there. Classic coastal architecture, maritime forests and funky town names like Currituck, Corolla, Coinjock, Nags Head, Kill Devil Hills, Duck and Kitty Hawk only enhance their opinions of the region.

Yet, for many of its millions of visitors every year, golf around the Outer Banks never represented much more than an afterthought. Of course, a modicum of change is necessary to grow any golf destination — and without the slow, steady and sensitive construction of quaint vacation properties, restaurants, businesses, golf courses and other elements in and around these barrier islands that divide the Atlantic Ocean from the sounds  — the Outer Banks wouldn’t have evolved into the active and vibrant vacation escape that it is today.

Today, an outstanding selection of fun and affordable yet quality golf courses are helping transform the Outer Banks into a mini-Mecca sportsman’s paradise. With a wide array of courses more closely tied to the ocean and interior waterways than what you'll find in other East Coast golf destinations, a trip to OBX is now also about tee times, shots along the sound, and an array of after-golf dining options that include selections pulled directly from nearby waters and then freshly prepared by local chefs.

For larger groups headed for the barrier islands and their nearby inland activities, an ideal itinerary might include renting a spacious and well-appointed golf cottage like the one situated next to the clubhouse at Kilmarlic Golf Club, the newest offering along the upper Outer Banks. Featuring a fresh Tom Steele design that hosted the North Carolina Open in 2004 and 2009, Kilmarlic is centrally positioned among all the popular OBX golf venues including the two main ones – The Currituck Club and Nags Head Golf Links. Despite their similar locations in terms of oceanfront proximity, both provide inherently different experiences on any given day.

Nags Head, crafted by Bob Moore, plays hard along the inner waterway. The front and back nine closing holes along the sound are particularly spectacular. Nags Head’s bar/restaurant, not surprisingly, is also home to the most dramatic sunsets in town, with views not only across the immediate Roanoke Sound, but towards three other sounds (Albemarle, Croatan and Pamlico) that flow into it from the north, west and south as well.

The grandest design along the coast is also the area’s most demanding, especially when the wind kicks up. The Currituck Club, routed by world-renowned architect Rees Jones, rolls across diverse coastal terrain with sound-side views distinctly its own.

Two other courses also on the mainland but certainly worth leaving the island to go play include The Pointe Golf Club and The Carolina Club, a pair of the most immaculately manicured and impeccably conditioned golf courses you will find anywhere. After all, the sister layouts are owned and operated by a man who also runs one of the region’s major turf grass companies, and both courses were built on what had previously been fertile farm land.

“We think the Outer Banks has some of the best maintained courses compared to our competition in other geographic areas,” says Keith Hall, owner and general manager of The Pointe Golf Club and The Carolina Club, who also runs a family business called United Turf. “All of the courses are well conditioned and well groomed. We pride ourselves on the condition of the greens and tees. In general, all the courses have stepped up their quality of maintenance and we feel we can compete with the best.”

Spring packages start at $229 per person (March-May) and include three rounds of golf selected from among these five award-winning courses — Kilmarlic Golf Club, Nags Head Golf Links, The Currituck Club, The Pointe Golf Club and The Carolina Club — and two nights accommodations at one of many first-class options.